How this insurer detects distracted drivers

Canada’s largest property and casualty insurer is checking to see whether some of its auto insurance clients are using their phone while driving.

If your auto client is insured by Intact under its My Driving Discount program, Intact can detect mobile phone use, company officials told Canadian Underwriter.

“There are different levels of phone usage that we can monitor,” Julie Nolette, Intact’s vice president of personal lines, said in a recent interview. 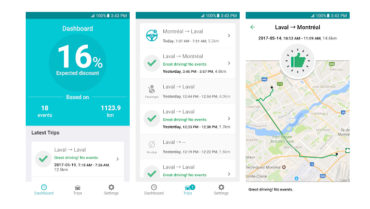 In Ontario and Alberta, insurers can base rates on telematics, though they may only give discounts for good behaviour rather than surcharges for risky behaviour.

Intact led the Canadian P&C market in 2017, with 17% market share and $8 billion in direct premiums written, according to Canadian Underwriter’s 2018 Statistical Guide. Aviva and Desjardins are in second and third place with premiums in 2017 of $5.1 billion and $4.3 billion respectively.

Intact started offering telematics in 2014. Intact’s My Driving Discount monitors how drivers use their phone when driving, such as hands-free calls, hand-held calls and active phone use -such as texting, tapping and swiping, an Intact spokesperson said Friday.

“We are monitoring distracted driving and sending notices or giving a score to drivers so they can improve on their driving behaviour and be rewarded for safe driving,” Nolette said in an interview.

She was commenting on distracted driving penalties that took effect Jan. 1 in Ontario.

Four years ago, the minimum fine for distracted driving in Ontario was $60 while the fine was $500.

The minimum fine for a first offence is now $500. Motorists in Ontario who are caught driving while distracted also face three-day licence suspensions.

“We really welcome the measures that the Government of Ontario has put in place as of January 1,” Nolette said. “The increase in penalties will, hopefully, make drivers think about their behaviour behind the wheel.”

Distracted drivers who are caught a second time face a one-week licence suspension and repeat offenders with more than two distracted driving charges face 30-day suspensions of their driver’s licences.

The Highway Traffic Act prohibits drivers from holding or using a device that is capable of receiving or transmitting telephone communications, electronic data, mail or text messages.

Ontario law also considers it distracted driving if the motorist is holding or using a hand-held electronic entertainment device if the primary use is unrelated to the safe operation of the vehicle.

There are exceptions, such as GPS devices and certain commercial vehicle delivery devices.

More News
Related
Intact reports ‘world of difference’ with telematics
Will telematics make territory-based rating a thing of the past?
Autonomous vehicles coming, but auto books will not disappear any time soon: CIAA event speaker
Has Intact noticed the impact of pot legalization on auto claims?

7 Comments » for How this insurer detects distracted drivers