All 10 Canadian provinces and Yukon are not making the grade when it comes to flood preparedness, signalling the need for change, including not allowing municipalities to override provincial or territorial direction on development in flood-prone areas, argues a new report from the Intact Centre on Climate Adaptation at the University of Waterloo. 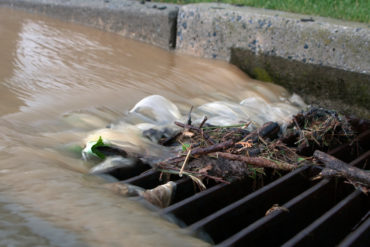 Flood preparedness is simply not where it could be, contends Climate Change and the Preparedness of Canadian Provinces and Yukon to Limit Potential Flood Damage, demanding forward-thinking approaches and immediate preventive measures.

Released Monday, the report notes that such measures include mandating the restriction of new development in flood-prone areas and rebuilding infrastructure to future-projected flood risk, notes a statement from the university.

“Municipalities should not be able to override direction from the provinces or Yukon that restricts development in flood-prone areas, or that mandates flood-resilient design,” one of the report’s recommendations points out.

Overall, the research shows the 10 provinces and Yukon achieved an average flood preparedness score of C-. “This score suggests that there is a considerable margin for Canada to better prepare for, and potentially mitigate, future flood risk.” 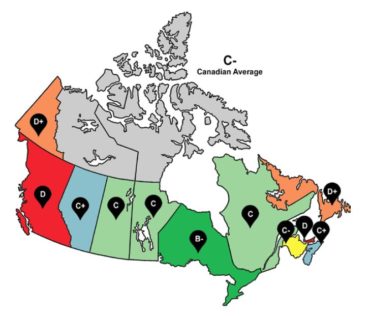 “The financial and social costs to Canadians will mount if preparedness to extreme weather events, and in particular flooding, continues to receive limited attention,” Blair Feltmate, who heads the centre and is a professor in the university’s School of Environment, Enterprise and Development, notes in the statement.

“The federal government spent more on recovering from large-scale natural disasters over the past six years than in the previous 39 years combined,” states the report, citing a 2016 report from the Office of the Auditor General of Canada.

“The extent to which Canada is prepared to address climate-related risks, including severe floods, will define its long-term competitiveness,” it cautions. 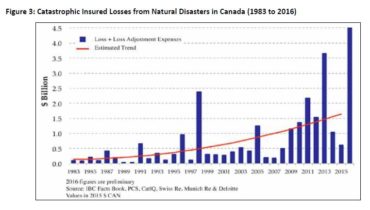 Based on a survey of 103 government representatives across 91 provincial and territorial ministries, departments and agencies, the report explores the preparedness of the provinces and Yukon (Northwest Territories and Nunavut are not covered in this report) to limit flood damage relative to current and future (2030) major rainfall events.

The barely passable C- grade was not consistent across all assessment categories.

Not so positive was the performance with regard to engagement with home and commercial property owners to identify and mitigate flood risks.

Reflecting survey feedback, the following immediate actions by the provinces and Yukon to improve flood preparedness are recommended:

On the last point, “in the absence of land-use planning that better addresses flood risk, federal Disaster Financial Assistance Arrangement (DFAA) assistance to provinces and territories should be limited,” the report states.

Land-use planning – generally, municipal governments maintain responsibility and authority for planning development of all private lands within their boundaries – “is one of the most effective processes to minimize flood risks to municipalities and rural communities,” the report maintains.

Still, “some participants noted municipal councils have significant power to override their own land-use restriction bylaws to approve new developments, even if the developments are in recognized flood-prone areas.”

Decidedly more positive was the finding that the provinces and Yukon were “doing relatively well in ensuring public health and safety by maintaining the capacity of hospitals and public health units to support the continuity of service delivery during floods,” the university statement notes.

As well, high scores were received for emergency preparedness, “as the provinces and Yukon work with local authorities and community leaders to identify and prepare for flood vulnerabilities,” it adds.

Other findings and respondent observations in the report include the following: 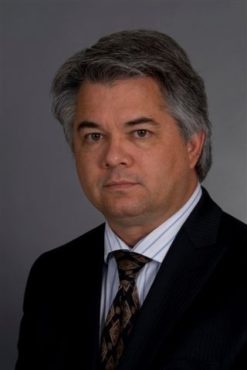 Blair Feltmate, head of the Intact Centre on Climate Adaptation and a professor at the University of Waterloo

Noting that premiers are showing leadership on carbon pricing, there is a need to “build upon this commitment by embracing adaptation to address extreme weather and flooding with equal enthusiasm,” Feltmate (pictured right) emphasizes.

“Recognizing that climate change and extreme flood potential will continue unabated across Canada, the provinces and territories should immediately address (the five recommendations) to avoid otherwise inevitable and irreversible financial and social strife,” the report warns.