Insurance providers need to “rethink” how they provide advice to customers in their 20s and 30s, the president of Intact Insurance suggested Thursday to an audience of Ontario brokers. 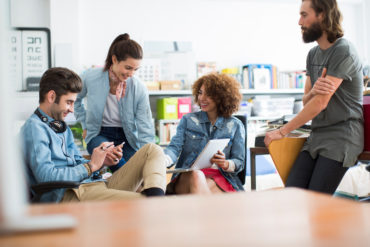 J.D. Power and Associates defines millennial as a person born between 1977 and 1994.

“If you look at the research, (millennials) will search for digital advice but they will also try to chat and ask their friends,” Blais said in reply to a question from moderator Jim Harris. “So I think we have to rethink how we give advice to millennials – how they want advice according to what I believe in.”

The convention was held at the Sheraton Centre in Toronto.

During the CEO panel, Harris had asked Blais what he felt was the most important investment that Intact could make in the broker business model.

“We have to invest in technology for sure, digitalize some processes, improve the service, be faster,” Blais said. “When we talk about millenials – by the way, millennials are the largest generation … bigger than the boomers, so if we don’t adapt to what millennials are looking for, we will not be letting go a small niche of people. We will be letting go of the majority of the future customers.”

In this year’s CEO panel, Harris interviewed, individually, each of five leaders of Canadian P&C carriers in what he called the “hot seat.”

Harris asked what Intact’s “organic growth metrics” would “look like” if Intact did not own BrokerLink.

“The growth of our broker business over the last 18 months has been $500 million in Canada,” Blais said, adding about $200 million of that was in Ontario alone.

Intact – owned by Intact Financial Corp. – distributes through brokers, including those of its BrokerLink subsidiary. Intact also distributes directly to consumers through belairdirect.

“BrokerLink is a billion-dollar business and they were a very small part of that growth,” Blais said, adding BrokerLink comprised “maybe between 5 and 10%” of that growth.

“We do business with about 2,000 brokers in Canada and we have financial positions – loans and equity – in roughly 200 of them,” Blais said. “It’s not like we have a financial interest in the majority of our brokers.”

The IBAO convention wraps up Friday.

1 Comment » for Insurers who fail to “adapt to what millennials are looking for” will let go of “majority” of customers: Intact president