The recession will be long and painful so brokers and insurers need to settle in and do what they do best, property and casualty experts said. And don’t be surprised if some mergers and acquisitions activity push forward as tough times extend.

“There’s not a lot of great cheer about a slow recovery. But, simply to say, we’ve been through worse before and our industry responds to do their very best for consumers and I would expect exactly the same this time,” said Alister Campbell, president and CEO of the Canadian Property and Casualty Insurance Compensation Corporation (PACICC).

He was speaking alongside Saad Mered, CEO and chief agent of Zurich Canada and Roger Hacala, past president of the Toronto Insurance Council (TIC) and national practice leader of BFL Canada Risk & Insurance Services, as part of Canadian Underwriter’s webinar entitled COVID-19 and the Economy: The Impact of a Recession on the Canadian P&C Industry.

“When the economy suffers, our industry suffers. We travel in parallel with it. So, if we just assume this is just a slow recovery, that will extend the pain for the industry,” Campbell continued. “That will make it harder to be a broker. It’ll make it less fun to be a chief agent of a multinational insurer. It’ll make it very challenging to produce the kinds of returns that shareholders will be expecting in such volatile times.”

From increased rates to the profitability of insurers to decreased capacity there are plenty of challenges in the way of seeing the industry thrive, Hacala said. “First and foremost, we’re concerned about: Where do we create value for our clients to be able to actually do that in this environment?”

Where brokers can step up is by taking a look at their clients’ entire financial picture, rather than just their insurance needs. “It’s not just about the insurance spend, it’s also about what do they do for financial arrangements and everything else on that side and trying to talk about wholesome solutions as far as what they’re doing,” Hacala said. “Because operational risk is a lot more than just talking about when the insurance is going to kick in at the 11th hour when something does happen.” 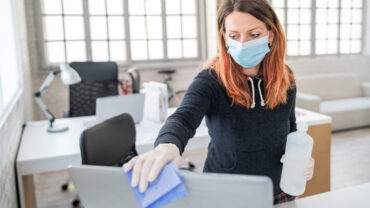 The top concern Mered has heard from business leaders is how to get people back to work. They’ve asked if people want to go back to their office, shop or plant. “And the answers are not a resounding yes,” he reported. “Until our citizens see a workable, viable, safe vaccine, I think this ‘back to normal at work’ will be slow and long. Going back to restaurants, going back to hotels and all those things will take some time.”

So buckle in, in other words. The recovery will not be a short one. Hopes of a V-shaped recovery are gone now. “We can debate the shape and size of the W’s and how many W’s there will be,” Mered said, referring to a W-shaped recovery where the health of the economy bounces up and down over a period of time.

But what keeps him up at night is the amount of debt that governments and ordinary people are carrying thanks to the COVID-19 pandemic. “That’s just a huge mortgage for the future, which will translate into increased taxation,” he said. “So this is where we’re trying to compute all this and understand what that means for common growth and how much of a drag that will that be on entrepreneurship and business investment and, let’s say, courageous economic behaviour, which we depend on as an industry.”

And with a slow recovery comes a “thinning of the herd,” for both insurers and brokers, Hacala pointed out. “Broker M&A hasn’t really slowed down but it may be that there are better deals to be had depending on how some are performing. If we do see some of that happening, that may be just opening up another change or another dynamic to the industry on our current environment.”

More News
Related
What Canadian P&C industry fears the most about the pandemic
Will the pandemic spawn an industry-wide digital roadmap?
How brokerages can avoid the ‘single point of failure’ while workforce is at home