KAMLOOPS, B.C. – British Columbia’s wildfires have destroyed a record amount of forest, brush and grassland, surpassing the devastation of nearly 60 years ago. 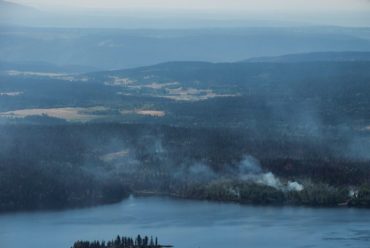 With no rain in the forecast for the wildfire-ravaged southern parts of the province, Skrepnek said more land will be burned.

“Temperatures should be relatively seasonal going forward, so that’s one silver lining,” he said. “But the presence of wind and the lack of rain are going to be much more critical factors.”

A total of 1,029 fires have occurred since the April 1 start of the wildfire season, and 149 of them are still burning.

A fire that destroyed dozens of homes near Ashcroft six weeks ago has now consumed even more structures in the Green Lake area almost 100 kilometres away.

Thompson-Nicola Regional District spokeswoman Debbie Sell said crews have not been able to access the site to determine exactly what has been lost as the active blaze that is more than 1,600 square kilometres in size continues to pose a danger.

Sell said affected property owners will be contacted as soon as specifics of damage are available.

Agriculture officials at the federal and provincial government levels are also working to tally damages that farmers and ranchers have suffered as a result of the fires.

Popham said she understands people are facing “extraordinary costs” after their land, equipment, crop and livestock were destroyed and both levels of governments are working as quickly as possible to deliver help.

“One of the things we’re realizing is that the losses of farms and equipment is very much weighing on our farmers, but the emotional toll is enormous,” she said.

The extra help could cover everything from costs related to feeding, sheltering, transporting and ensuring the health of livestock to the expenses of re-establishing crops and pastures wiped out by the fires.

The exact amount the government will spend on these programs is still being calculated, but Popham said it will be in the millions of dollars.

RCMP are continuing to investigate human-caused fires and suspected arson.

Spokeswoman Dawn Roberts said charges against four males, all under the age of 18, are pending after a fire was set in a suburb of Williams Lake.

She said the men are also believed to be connected with a series of break-and-enters in the area that happened at the same time.

A trailer home that was destroyed in a fire 40 kilometres east of Alexis Creek has also been deemed a suspicious occurrence.

Roberts said the owner was located unharmed and the fire didn’t spread to the surrounding area.