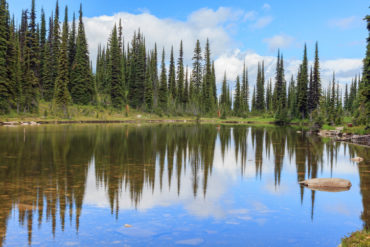 The River Forecast Centre says rivers throughout the Columbia and East Kootenay regions, including tributaries around Golden, Revelstoke and the Columbia Valley, are rising.

The centre says rivers and streams are expected to approach or exceed flood level today, while the Shuswap and South Thompson rivers are also high enough to burst their banks.

As much as 30 millimetres of rain deluged the southern and central interior today.

The downpour is being blamed for a washout that closed Highway 1 about 25 kilometres west of Revelstoke until at least Sunday, which is expected to add hours to road trips.

Environment Canada says rainfall warnings were issued for much of north-central and northeastern B.C., with up to 25 millimetres forecast for some areas today, in addition to the 15 to 25 millimetres that fell Thursday.