Natural hazard activity in the United States in 2016 was “relatively average or below average,” with the exception of flood and wind, both of which saw above-average activity, due in large part to Hurricane Matthew, CoreLogic, Inc. said on Thursday. 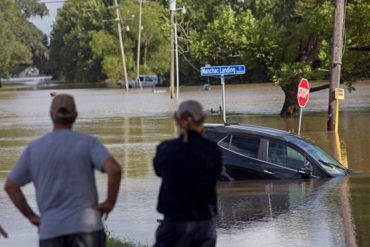 The analysis found that at US$17 billion, total flood loss in 2016 was six times greater than the overall flood damage experienced in 2015. CoreLogic noted in a statement that five flood-related events in 2016 exceeded US$1 billion in losses, including: 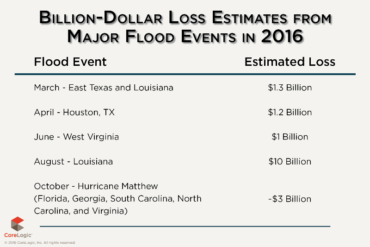 Regarding wind, due in large part to strong winds brought by Hurricane Matthew, the land area impacted by severe winds (greater than 80 miles per hour) was three times greater than in 2015. Kennedy Space Center, Fla. recorded the highest wind speed of the year at 101 mph during Hurricane Matthew. CoreLogic said in the statement that nearly one-third of the continental U.S. experienced wind events of 60 mph or higher in 2016. Among the nation’s largest cities, Nashville, Tenn. ranked as the windiest city, with 21 wind-related events last year and a maximum wind speed of 72 mph.

The report noted that Atlantic hurricane activity was slightly higher than average in 2016, with 15 named storms, including eight tropical storms and seven hurricanes. Three of these were major hurricanes identified as Category 3 or greater. Hurricane Matthew caused an estimated US$4.6 billion worth of damage in insured losses, $US3.5 to US$5 billion caused by wind and US$500,000 to US$1 million caused by storm surge. 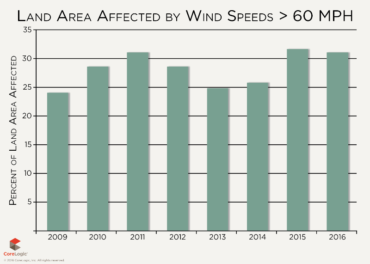 The 2016 activity for the other hazards – wildfire, hail, tornado, earthquake and winter storm – include: