Munich Re operating result down in 2016 from 2015, new partnerships could answer changing client demands 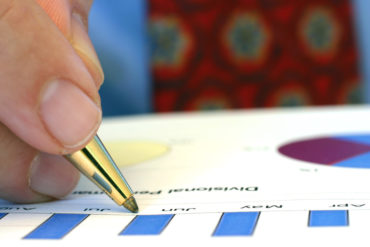 “The lower technical result and the costs of the ERGO Strategy Programme were only partly offset by gratifying investment and currency translation results,” Munich Re, which combines primary insurance and reinsurance, notes in a statement Wednesday.

Also down – although not as much as operating result – was both gross premiums written (GPW) and net earned premiums (NEP), Munich Re figures show. 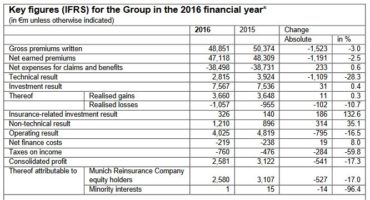 By segment, the Life reinsurance business contributed 459 million euros to the consolidated result in 2016 compared to 345 million euros in 2015.

“Claims experience was impacted by high expenditure for single mortality claims with high sums insured, but was. Nevertheless. within the overall range of normal volatility,” Munich Re reports.

The cost of natural catastrophe losses in 2016 was 929 million euros – considerably more than the 149 million euros in 2015 – with the Fort McMurray wildfires, at 404 million euros, “by far the biggest loss of the year for Munich Re.”

“Competition in reinsurance remains intense,” Torsten Jeworrek, a member of Munich Re’s Board of Management, says in the statement.

Noting that Munich Re was able to hold its own, “it withdrew from business that no longer met profit expectations, but was able to expand on or write new profitable business. Overall, Munich Re was mostly able to retain the profitability of its renewed portfolio, and price erosion was only 0.5%,” Jeworrek adds.

Nikolaus von Bomhard, chairman of Munich Re’s Board of Management, notes that the company had a profit of 2.6 billion euros in 2016, meeting its most recent forecast of well over 2.3 billion euros.

For 2017, Munich Re is aiming for a profit in the range of 2.0 billion euros to 2.4 billion euros “in what is set to be a challenging environment,” von Bomhard points out.

“Digitalization is changing client demand, allows for the development of innovative business models, and requires us to set up partnerships that would previously not have been considered,” he reports.

Other financial results for 2016 include the following: