Recent earthquakes a reminder that events can happen anywhere: I.I.I.

The recent earthquakes in Italy and Myanmar are a warning to homeowners and business owners in regions that may also be at risk to consider purchasing earthquake insurance, notes the Insurance Information Institute (I.I.I.). 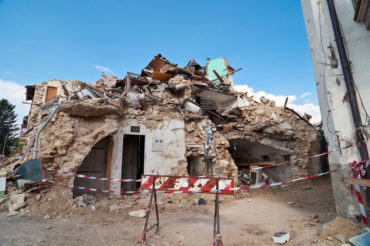 Just 10% of homeowners in the U.S. have insurance coverage for earthquake-caused property damage, notes a statement from I.I.I., which is based in the United States.

In the U.S., coverage for earthquakes is generally available in the form of a supplemental policy that provides protection from the shaking and cracking caused by earthquakes that can destroy buildings and personal possessions.

Cars and other vehicles are covered for damage from earthquakes under the optional comprehensive portion of auto insurance policies, the statement adds.

“In Canada, there are 4,000 recorded earthquakes each year, and earthquake damage is not be covered by a standard home insurance policy,” notes information from Insurance Bureau of Canada (IBC).

The I.I.I. comments follows the earthquake in central Italy on Aug. 24.

The strong and shallow quake – measuring magnitude 6.2 – struck at 3:36 local time about 10 km southeast of Norcia and 100 km northeast of Rome, notes a statement from catastrophe modelling firm AIR Worldwide.

Numerous buildings have collapsed and severe building damage has been reported in the historic town of Amatrice, AIR Worldwide notes.

“Reports suggest around half of the town has been destroyed, including the hospital, with entire palazzos destroyed,” says a statement from Risk Management Solutions (RMS).

“Aerial imagery of the town of Amatrice indicates significant damage to the majority of buildings,” the statement continues.

As well, notes AIR Worldwide, historical and heritage buildings have been damaged and destroyed in Norcia and Pescara del Tronoto.

Again, coverage for earthquakes in Italy is often not included in standard homeowners’ policies and is typically issued as an extension of fire policies.

“Because most structures were built before the introduction of comprehensive seismic building codes and modern construction technology, the risk of collapse during an earthquake for those erected prior to 1980 is very high,” it states.

“It wasn’t until 1996 that provisions were introduced to limit excessive building flexibility, which can cause damage to the nonstructural elements of a building during low-to-medium intensity earthquakes,” AIR Worldwide adds.

“But it is clear there is little higher value property in the towns and villages affected by the area of stronger shaking, which will limit insurance losses as residential properties are generally uninsured for earthquake,” Muir-Wood says.

“This week’s earthquake has broken a fault parallel and to the north of the fault that caused the 2009 l’Aquila M6.3 earthquake,” he notes in the RMS statement.

Noting that Amatrice is about 25 km north of l’Aquila, “it is likely the latest earthquake was triggered by the 2009 fault movement. These faults are normal or extensional structures, both perhaps 20 km long. The high mountains along the centre of the peninsular are splitting apart,” Muir-Wood explains.

“While there was no town in its path as large as l’Aquila, the building quality in these small towns and villages is very poor,” he adds.