The quakes had on impact on the regions of Lazio, Marche and Umbria, notes a statement Thursday from PERILS, an independent, Zurich-based organization that provides data relevant to the insurance industry with the aim of increasing the understanding of insured risk and to facilitate risk transfer.

The loss estimate is up considerably from the initial loss estimate of 31 million euros issued on Dec. 7. The next estimate will be released in late October.

In all, three major earthquakes with moment magnitudes of Mw 5.4, 5.9 and 6.5 were experienced, PERILS reports, citing the Italian National Geophysical Institute.

“The area of damaging shaking intensities was considerably larger than that experienced during the Aug. 24 earthquake, due primarily to the large magnitude of the earthquake, which occurred on Oct. 30,” PERILS noted following the latest quakes. 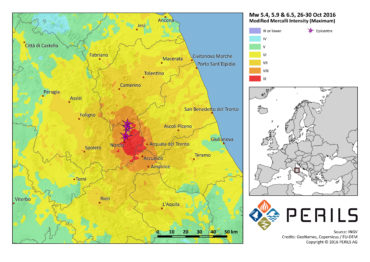 “This earthquake was felt throughout Italy, and also in parts of Austria and the Balkan states across the Adriatic Sea,” the company pointed out.

“In total, there were only three fatalities despite the massive destructive force of these earthquakes. This demonstrates the effectiveness of the rescue work carried out by the local fire brigades and the Civil Protection Agency in the area,” PERILS added.