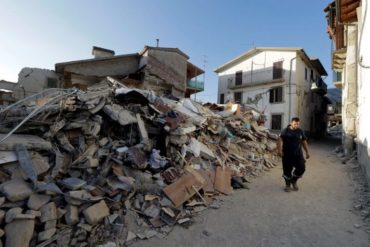 A man walks by rubble in the village of Santi Lorenzo e Flaviano, central Italy, Saturday, Aug. 27, 2016. Italians bid farewell Saturday to victims of the devastating earthquake that struck a mountainous region of central Italy this week. (AP Photo/Andrew Medichini)

The third loss estimate for the quake is scheduled to be published Feb. 24, 2017, notes a statement Thursday from the company, an independent, Zurich-based organization that provides industry-wide catastrophe insurance data.

The epicenter of the magnitude 6.0 quake on Aug. 24 was located near the borders of the Lazio, Marche and Umbria regions, an area known for experiencing high seismicity, PERILS AG reported when it released its first loss estimate in early October. 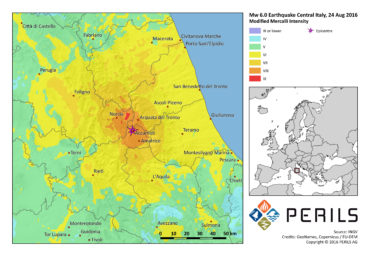 Claiming the lives of 298 people, mostly in small towns, “the last significant earthquake in the Central Apennine mountain range occurred in April 2009 and mainly affected the town of Aquila, which is situated only 45 km to the south of this event,” it added.

In late August, Fitch Ratings reported that it was estimating insured losses of 100 million to 200 million euros, arising mainly from property lines, related to the quake.

In late October, Italy experienced a series of earthquakes that hit a similar region in Central Italy from Oct. 26 to 30.

Should PERILS conclude that this is a qualifying event, a first loss report is scheduled to be released Dec. 7.

More News
Related
Recent earthquakes a reminder that events can happen anywhere: I.I.I.
Insured losses of New Zealand quake could be as much as US$3.5 billion: AIR Worldwide
Insured losses from latest Mexico earthquake not expected to exceed US$1.2 billion: RMS
CatIQ enters into agreement with Impact Forecasting to use cat event flood response footprints for Canada