October 28, 2016   by Alessandra Tarantino and Colleen Barry - THE ASSOCIATED PRESS

VISSO, Italy – Officials in central Italy began early Thursday to assess the damage caused by a pair of strong earthquakes in the same region of central Italy hit by a deadly quake in August, as an appeal went out for temporary housing adequate for the cold mountain temperatures. 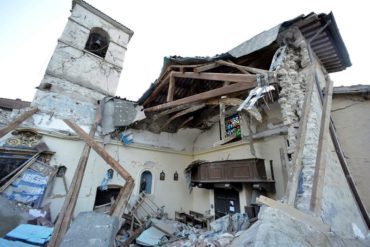 A view of a damaged church in the village of Visso, Italy, Thursday, Oct 27, 2016 after a 5.9 earthquake destroyed part of the town. Authorities scrambled to find housing Thursday for thousands of people displaced by a pair of strong earthquakes that struck the same region of central Italy hit by a deadly quake in August. (AP Photo/Sandro Perozzi)

Thousands of people spent the night in their cars following the pair of quakes that struck late in the evening, sending residents into the streets in pouring rain, too late for authorities to come up with adequate shelter. A series of small shocks overnight, including two registering magnitudes above 4 before dawn, further unsettled residents.

The morning after the quakes, there remained no reports of serious injuries or signs of people trapped in rubble. The head of Italy’s civil protection agency, Fabrizio Curcio, said it appeared that the situation “is not as catastrophic” as it could have been. A 73-year-old man died of a heart attack, possibly brought on by the quakes, local authorities told the ANSA news agency.

Mayors of towns scattered in the mountain region spanning the Umbria and Marche regions say many more homes were rendered uninhabitable, on top of those damaged in the August quake, while historic structures that survived previous quakes had succumbed this time.

Heavy damage to some buildings in the centre of the town of #Visso #terremoto pic.twitter.com/2KusFADgzZ

Camerino Mayor Gianluca Pasqui said the town’s historic bell tower had collapsed, but emphasized that reconstruction work after a 6.1 quake in 1997 appeared to have contributed to the absence of serious injury.

“I can say that the city didn’t have victims. That means that even if there is a lot of damage probably the reconstruction in the historic centre was done in a correct and adequate manner. Because otherwise, we would be speaking of something else,” Pasqui told Sky TG24.

The president of Umbria region, Catiuscia Marini, told RAI state television that officials are scrambling to come up with temporary housing, mindful that with winter approaching and temperatures dropping, tents can’t be deployed as they were after the August quake. The concern for the predominantly elderly population of the remote mountain region was repeated by other officials.

Marini said that after the quakes many people will be fearful of staying even in hotels deemed safe, and that solutions like campers were being considered.

A view of the inside of the church of St Anthony after 5.9-magnitute earthquake destroyedthe town
PhotoAlessandra Tarantino pic.twitter.com/CWaZVY84Hc

“We don’t have injured, we have people who are very afraid, who have anxiety, especially the elderly,” she said.

In Visso, Mayor Giuliano Passaglini said he was only able to provide shelter for a couple hundred residents overnight, and most people spent the night in their cars.

Firefighters were helping residents to retrieve objects from their homes in the red zone. Most were intact, showing only cracks.

The first quake struck at 7:10 p.m. and carried a magnitude of 5.4. But the second one a little more than two hours later was eight times stronger at 6.1, according to the U.S. Geological Survey. Officials said the fact that people had already left their homes when the second quake hit probably saved lives.

“Many houses collapsed,” the mayor of hard-hit Ussita, Marco Rinaldi, told Sky TG24. “The facade of the church collapsed. By now I have felt many earthquakes. This is the strongest of my life. It was something terrible.”

Damages of the #earthquake in #Italy #ussita #visso
Waiting and praying. pic.twitter.com/TP5HGGpiKt

Rinaldi said two elderly people were rescued from their home, where they were trapped, and appeared to be in good condition.

Calling it “apocalyptic,” he said the town and its hamlets were “finished.” In addition to the town’s church, the parish and other buildings also had suffered heavy damage, he added.

A church crumbled in the ancient Perugian town of Norcia, famed for its Benedictine monastery and its cured meats. A bell-tower damaged on Aug. 24 fell and crushed a building in Camerino, the ANSA news agency said. Elsewhere, buildings were damaged, though many were in zones that were declared off-limits after the Aug. 24 quake that flattened parts of three towns.

Schools were closed in much of the area Thursday as a precaution and a handful of hospitals were evacuated after suffering damage.

Premier Matteo Renzi, who cut short a visit to southern Italy to monitor the quake response, tweeted “all of Italy is embracing those hit once again.”

The quakes, shaking buildings in Rome some 230 kilometres (145 miles) southwest of the epicenter, were actually aftershocks of the magnitude 6.2 earthquake from two months ago. Because they were so close to the surface – about 10 kilometres, or 6 miles – they have the potential to cause more shaking and more damage, “coupled with infrastructure that’s vulnerable to shaking,” said U.S. Geological Survey seismologist Paul Earle.

“They have a lot of old buildings that weren’t constructed at a time with modern seismic codes,” he said.

#BREAKING: Damage in Visso #Italy after the 2 earthquakes – @clapaudice pic.twitter.com/U35fUwVkBw

Map of today's M6.1 Italy earthquake in relation to the seismic sequence in central Italy since 24 Oct 16. Original map from @INGVterremoti pic.twitter.com/cEwdo8xhfP