Typhoon Lionrock has made landfall in Japan, bringing the intensity of a Category 1 hurricane with resulting landslides and flooding.

The typhoon made landfall in the Tohoku region of Japan on Tuesday evening, near the city of Ofunato in Iwate Prefecture, catastrophe modelling firm AIR Worldwide said in a press release on Tuesday. 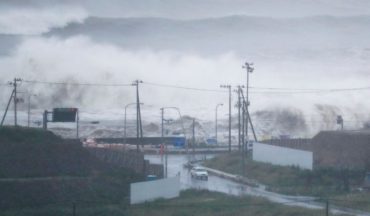 The first typhoon to make landfall on the Pacific side of the Tohoku region since the Japan Meteorological Agency (JMA) began recordkeeping in 1951, Lionrock hit the same area devastated by a magnitude-9.0 earthquake and tsunami in 2011, which caused massive damage to the Fukushima Daiichi nuclear power plant.

“Typhoon Lionrock, which came ashore about 500 kilometers (310 miles) northeast of Tokyo, was downgraded to a tropical storm as it moved inland,” said Dr. Anna Trevino, senior scientist at AIR Worldwide, in the release. “Lionrock should cross the Sea of Japan by the end of the week and bring heavy rain to Russian maritime territory and northeastern China.”

Dr. Trevino noted that Lionrock “made landfall at high tide, exacerbating storm surge and resulting in flooding in many coastal areas. High wind from the storm has brought down power lines throughout the region, resulting in as many as 10,000 homes being without power.”

It is the fourth typhoon to make landfall in Japan in 2016.

Lionrock is expected to cause much greater damage from the inundating rain than wind, Dr. Trevino reported. By Tuesday evening, the JMA had reported that 15 centimetres of rain had fallen in the region, and some areas across Honshu were projected to receive as much as 8 centimetres (3 inches) of precipitation per hour. Some areas of the Tohoku region were projected to receive as much as 35 centimeters of rain by Wednesday morning, more than they normally would see in a month, she said.

Landslides – a constant risk in Japan – have already shut down roadways and impacted travel. In anticipation of the Lionrock’s landfall, upwards of 170,000 people were affected by evacuation orders, according to the Fire and Disaster Management Agency. In addition, more than 100 flights were cancelled in and out of the northern region of Honshu and some bullet train services were discontinued.

According to AIR, Japan has “strict and well-enforced” construction codes, although many existing structures predate the existence of these codes. Residential exposures in Japan are dominated by wood construction; non-wood residences primarily consist of steel and concrete. Modern wood construction typically demonstrates the best performance in typhoons among all wood constructions in Japan. However, damage to roof coverings and windows can allow wind-driven rain to enter and cause extensive damage to contents, AIR reported. Furthermore, dislodged external components can become wind-borne debris and cause damage to surrounding structures and glazing.

#TyphoonLionrock intensifies to cat 4, on track for Sendai landfall #catastrophe as a cat 1 storm pic.twitter.com/fO5uvDJ2XK

Larger multi-family apartment buildings and commercial and industrial structures are generally engineered and made of reinforced concrete or steel. Complete structural collapse of engineered buildings due to typhoons is extremely rare; damage is usually confined to nonstructural components, such as mechanical equipment, roofing, cladding, and windows.

A significant portion of Japan’s industrial stock is of non-engineered light metal construction, which is one of the construction types most vulnerable to high winds. Low-rise, non-engineered commercial and industrial buildings usually perform similarly to single-family homes under typhoon conditions.

Even with modern flood-control structures the risk of flood damage remains high in Japan, AIR said. For a given flood depth/effective surge depth, a residential wood frame building generally will sustain more damage than a residential masonry building. Concrete construction is less vulnerable to flood than steel or masonry. Commercial and apartment buildings usually have stronger foundations than residential buildings, and are thus better able to resist flood loads.

Water damage to machinery and contents drives most flood-related loss also, because damage is usually limited to the lower storeys of a building, high-rise buildings will experience a lower damage ratio than low-rise buildings as a smaller proportion of the building is affected.

In Japan, wind damage is typically automatically covered under standard fire insurance policies, but flood damage is not, despite the fact that Japan regularly experiences “wet” storms that deliver extreme precipitation and flooding that contribute substantially to damage, AIR reported.

AIR continues to monitor the situation.