Where and when Hurricane Fiona is projected to hit Canada

Environment Canada (EC) has issued a tropical cyclone warning for the Atlantic provinces and southern Quebec as Hurricane Fiona is expected to impact the region starting Thursday evening and continuing into weekend.

“This storm is shaping up to be a potentially severe event for Atlantic Canada,” EC warned in a statement issued early Wednesday morning. “While it is too soon to provide specific details, it appears the west and southwest coasts of Newfoundland are the areas of the island likely to be the most severely impacted.”

“Since we expect the storm to become very large, the impacts will be multi-provincial. Again, this storm certainly has the potential to be quite severe.”

EC said Hurricane Fiona is expected to merge with a trough and transform into a hurricane-force post-tropical cyclone on Saturday. The combination will produce very heavy rain beginning Thursday night. 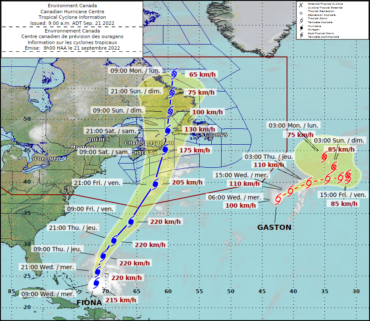 “Flooding and washed-out roads are likely in some areas,” EC warned. “Strong to severe wind gusts are expected to begin impacting the region on Friday, peaking on Saturday. Past storms of this nature have produced prolonged utility outages and structural damage. Buildings under construction will be particularly vulnerable.”

The Canadian Hurricane Centre’s projected hurricane track as of 9 a.m. Wednesday shows the hurricane making a direct hit on Nova Scotia and Newfoundland and Labrador. But EC cautions there is a 600- to 700-kilometre-wide zone “cone of uncertainty” centred over Cape Breton, N.S., with a broad coverage of hurricane-force winds, including over land. Rainfall totals suggested by main models is showing more than 200 mm north and northwest of the track.

Hurricane projections earlier this week showed strong winds of 150 km/h (Category 1) in the waters just southeast of Halifax by Saturday.

As of Wednesday morning, Hurricane Fiona was southwest of Bermuda with maximum sustained winds of 213 km/h. The now-Category 4 hurricane already devastated Puerto Rico, leaving a majority of people on the U.S. territory without power or running water. Hundreds of thousands of people scraped mud out of their homes following what authorities described as “historic” flooding, The Canadian Press reported.

The hurricane also lashed the Dominican Republic and the Turks and Caicos Islands. It has been blamed for directly causing at least four deaths.

Remnants of hurricanes often strike Atlantic Canada as tropical or post-tropical storms. In 2019, Hurricane Dorian caused about $105 million in insured damage, mostly in Nova Scotia (over $60 million). Dorian made landfall southwest of Halifax in September 2019 with sustained winds of 155 km/h. Roads were washed out, and homes and businesses were flooded.

Hurricane Larry in September 2021 caused an estimated $25 million in claims. The hurricane made landfall on the west side of Placentia Bay, Nfld. In the provincial capital, trees and power lines were knocked down, leaving about 60,000 customers without power.