Canada’s worst-ever insured natural disaster – the Fort McMurray wildfire – delivered a hard hit to the underwriting activity of Economical Insurance, contributing to a net income in the second quarter of 2016 of about half the prior-year quarter. 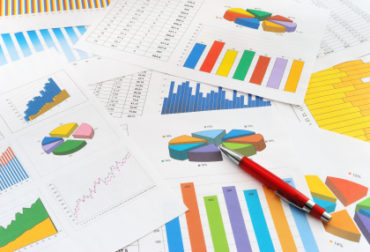 “Higher investment income and a lower effective tax rate were more than offset by weaker underwriting performance due to the Fort McMurray wildfire and continued infrastructure and operational investments,” notes a company statement issued Friday.

The incurred pre-tax losses related to the wildfire were $36.6 million, inclusive of reinstatement premiums and net of reinsurance recoveries, the statement adds.

With regard to premiums, both gross written premium (GWP) and net earned premium (NEP) were up somewhat in 2016 Q2 compared to 2015 Q2.

Specifically, GWP was up 2.3% to $585.4 million compared to $572.3 million. “Personal lines premiums grew by $14.7 million or 4.2%, driven primarily by increased auto policy volumes. Commercial lines premiums declined by $1.6 million or 0.7% over the same quarter a year ago,” the insurer reports.

“The overhaul of our commercial property and liability pricing strategy has continued to result in decreased policy volumes, which more than offset targeted rate increases,” the statement explains.

“Overall, we expect our commercial gross written premium levels to begin to stabilize as the execution of this phase of our pricing strategy is substantially complete,” the company adds. 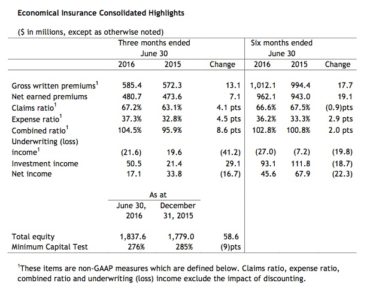 Despite the increase in premiums, however, Economical Insurance posted an underwriting loss of $21.6 million in the second quarter of 2016 compared to underwriting income of $19.6 million for the prior-year quarter.

“Overall, personal lines produced an underwriting profit of $16.3 million compared to $17.3 million in the same quarter a year ago,” the statement notes.

For commercial lines in the first half of 2016, the underwriting loss was $14.6 million compared to $17.7 million in 2015. “This improvement is primarily due to commercial property and liability whose performance, excluding the impact of catastrophes, is considerably better than year-to-date 2015.”

Economical Insurance also points to the impact from investments made in the development and launch of its digital channel and new policy administration system.

“We expect these strategic investments will continue to increase operating expenses during the implementation and start-up phases, but are expected to drive profitable growth and further improve our operational efficiency in the longer term,” Economical Insurance adds.