The Institute for Catastrophic Loss Reduction is “seeking to better understand” why partially-built wood frame structures fail with high winds, ICLR said in a document it provided Monday to Canadian Underwriter. 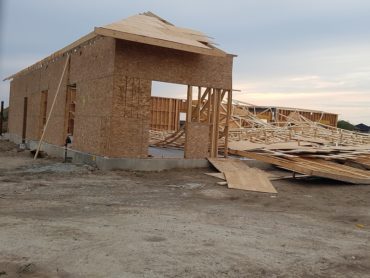 “ICLR is interested in isolating options for home builders, including off-the-shelf products or custom measures that builders can take to prevent such failure,” added ICLR.

Researchers from Western University visited a site north of London, in the community of Ilderton “which was hit by high straight line winds on Saturday, October 7,” ICLR reported. “Strong gusts led to the failure of a partially built wood-frame office. Accompanying photos indicate wood truss and wall failure.”

A preliminary report from the researchers suggests “that the temporary bracing between the top chords of the roof joists was very short, and only spanned between each truss,” ICLR noted.

“Researchers indicated that the walls of the structure were entirely sheathed, however windows, doors and drywall had yet to be installed (window and door openings effectively double the drag, the opposing force caused by the wind, on the structure),” ICLR added.

At a recent conference, Greg Kopp, a civil engineering professor at Western, suggested that builders could construct homes that are resilient to tornadoes measuring up to 2 on the Enhanced Fujita scale.

“So many of the failures that we see” in houses due to wind “are related to quality of construction issues,” Kopp said Oct. 5 during the 44th Annual Engineering Insurance Conference (AEIC).

During a separate presentation at AEIC, McGillivray said ICLR has been trying to make hurricane straps mandatory under Ontario’s Building Code. The current version of the Ontario Building Code requires that roof joists be toe-nailed into the upper plate of walls using a minimum of three nails.

Hurricane straps are metal bands that wrap around trusses and connect to walls. Hurricane straps “would have kept roofs on” to some homes that were badly damaged during tornadoes in Angus in 2014 and in Vaughan in 2009, Kopp said at AEIC.