‘Quality of construction’ often a factor in wind damage to homes: AEIC speaker

The Institute for Catastrophic Loss Reduction has “heard really good things” about the prospect of hurricane straps being mandated in all new home construction in Ontario, ICLR’s managing director suggested at a recent conference. 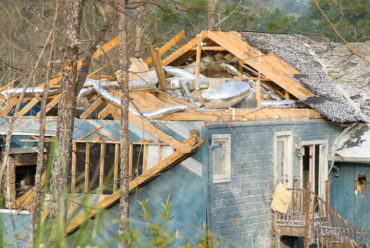 Hurricane straps, which are metal bands that wrap around trusses and connect to walls, “would have kept roofs on” to some homes that lost their roofs during tornadoes in 2014 in Angus and in 2009 in Vaughan, Ont., Western University civil engineering professor Greg Kopp said Oct. 5.

Hurricane straps “are not part of” the Ontario Building Code, Kopp added during a presentation at the 44th Annual Engineering Insurance Conference (AEIC).

Each Canadian province has its own building and fire code but the federal government’s National Research Council publishes national model construction codes developed by the Canadian Commission on Building and Fire Codes.

“We have several changes in to the Canadian national building code at the moment,” ICLR managing director Glenn McGillivray said during a separate presentation at AIEC, produced by the Canadian Boiler & Machinery Underwriters Association. “We have a couple in to Ontario.”

ICLR previously made several proposals to change the Ontario Building Code. One that was accepted was an increase to the number of nails in plywood roof sheathing on new homes, from a 6×12 (inches) pattern to a 6×6 (inches) pattern.

Currently, ICLR is trying to make both hurricane straps and backwater valves mandatory in all new construction, McGillivray suggested Oct. 5 during an AIEC presentation titled ICLR’s Natural Hazard Research: The Next 5 Years.

“We have mixed messages,” about the proposal to mandate backwater valves, McGillivray noted. “We have heard really good things about the hurricane straps.”

Instead of hurricane straps, the current version of the Ontario Building Code requires that roof joists be toe-nailed into the upper plate of walls using a minimum of three nails.

“We are hoping” the proposal to make hurricane straps mandatory “gets in,” to the Ontario Building Code, Kopp said. “Getting to the national code, which is the model for all the provinces, is very difficult. It’s controlled by industry people. The insurance industry is not there but the builders are there.”

In June, 2014, two tornadoes touched down within a week of each other in Ontario. One was in Tottenham and the other was in Angus, which are about 35 kilometres apart. At the time, published reports indicated that the tornado that hit Angus measured 2 on the Enhanced Fujuti scale.

“I believe we can make houses resilient to EF2 tornadoes,” Kopp said Oct. 5 at AEIC during a presentation titled Tornadoes and Revisiting Residential Construction Practices.

In Vaughan, which borders Toronto to the north, two tornadoes touched down in August, 2009 and caused damage to 500 homes, 25 of which had to be bulldozed, ICLR stated earlier.

“Those people that were out of their house for a year or more in some cases – that would have been a non-event” if there were hurricane straps, Kopp suggested Oct. 5.

“So many of the failures that we see” in houses due to wind “are related to quality of construction issues,” Kopp added.

Move critical infrastructure protection burden ‘on to the back’ of reinsurers: engineering conference speaker