The United States experienced 15 “weather and climate disasters” last year – each with losses exceeding US$1 billion – for a total of US$46 billion, the National Oceanic and Atmospheric Administration (NOAA) reported on Monday. 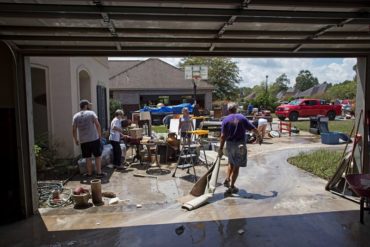 Friends and family help to clean out the flood damaged home of Sheila Siener, 58, second from left, in St. Amant, La., Saturday, Aug. 20, 2016. Louisiana continues to dig itself out from devastating floods, with search parties going door to door looking for survivors. (AP Photo/Max Becherer)

The disasters, which included eight severe storms, four inland floods, one wildfire (affecting multiple areas), one drought (affecting multiple areas) and Hurricane Matthew, claimed a total of 138 lives, NOAA said in a press release. This is the second highest number of disasters experienced in one year, with double the record number of inland flooding events for one year, the agency said, adding that since 1980, the U.S. has sustained more than 200 weather and climate disasters that exceeded US$1.1 trillion in overall damages.

Among the costliest disasters at US$10 billion in losses was the historic flooding in Louisiana, which “devastated a large area of southern Louisiana resulting from 20 to 30 inches of rainfall over several days,” NOAA said in the release, noting that the community of Watson received 31.39 inches of rain from the storm. Two-day rainfall totals in the hardest hit areas were considered a 1-in-500 year event. According to NOAA, more than 30,000 people were rescued from the floodwaters that damaged or destroyed more than 50,000 homes, 100,000 vehicles and 20,000 businesses, making the flooding the most damaging U.S. flood event since Superstorm Sandy in 2012.

Hurricane Matthew also cost an estimated US$10 billion in damages when it paralleled the southeast coast from Florida to North Carolina, causing widespread damage from wind, storm surge and inland flooding. The most costly impacts were due to historic levels of river flooding in eastern North Carolina, NOAA reported, where 100,000 homes, businesses and other structures were damaged. The inland flooding was comparable to Hurricane Floyd in 1999 that also impacted eastern North Carolina. Hurricane Matthew narrowly missed landfall on Florida’s east coast as a powerful category 4 storm.

In addition to the weather and climate disasters, NOAA said in the release that the average U.S. temperature in 2016 was 54.9 degrees Fahrenheit (2.9°F above average), ranking it as the second warmest year in 122 years of record-keeping. 2016 was also the 20th consecutive year the annual average temperature exceeded the average. Every state in the contiguous U.S. and Alaska experienced above-average annual temperatures, according to scientists from NOAA’s National Centers for Environmental Information.

Related: Hurricane Matthew causes up to US$15 billion impact to U.S. and Caribbean economies in October: Aon Benfield

Precipitation for the year totalled 31.70 inches, ranking as the 24th wettest year. The national drought footprint expanded from about 18% in January to about 23% by the end of December. At just under 19%, the average area of drought in the U.S. for 2016 was the smallest since 2010, the release added.