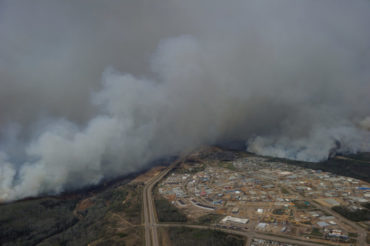 Aerial view of the wild fires in the Fort McMurray area from a CH-146 Griffon on May 4, 2016. The Canadian Armed Forces have deployed air assets to the area to support the Province of Alberta’s emergency response efforts. Photo: MCpl VanPutten, 3 CSDB Imaging.

“In terms of the fire outlook across Canada, we’re not out of the woods yet,” Rennie said during a session titled Mega Cat Risk – Can the Industry Cope with the Aftermath?, held at the Allstream Centre in Toronto. “Wildfire season has just begun and above normal temperatures and dry conditions are expected throughout most of the country in the coming months.”

While acknowledging that the Fort McMurray wildfire is, “by far, the largest cat in Canadian history,” Rennie did not want to publicly release damage estimates. “Since numbers stick around, we wanted to have a high level of confidence in our estimate before publicly announcing it,” she said, pointing to the most recent survey performed by CatIQ that showed industry losses for the 2011 Slave Lake, Alta. were approximately $515 million, excluding loss adjustment expenses. “This is an example of how numbers tend to stick around, because most refer to damage from Slave Lake as $700 million. Suffice it to say, Fort McMurray was not something we’ve dealt with in Canada before and the lessons learned could be crucial going forward.”

#MegaCat panel at #CIFF2016 with some engaging discussions on the governments role with #disaster #riskmanagement pic.twitter.com/KqvguLqK3i

She added that given the complex and ongoing nature of the Fort McMurray catastrophe, inaccessibility of the cat zone and the inability of some participating insurers to submit losses, CatIQ expects more confidence in their estimate at the 45-day industry update, to be released by the company at the end of June. The Co-operators has already estimated their losses at between $70 million and $90 million, while Economical Insurance’s preliminary estimates are between $35 million and $45 million.

Some of the precursors to the Fort McMurray wildfire included mild, warm and dry conditions in Alberta within the first four months of 2016, a milder winter season and early snowmelt and, “thanks to El Niño,” a wildfire season that began in the province on March 1, Rennie said during her presentation. In fact, she added, no notable precipitation was reported in the Fort McMurray area in April.

The Fort McMurray wildfire, which was determined to be human-caused as there was no lightning in the area, was originally reported on the evening of Sunday, May 1, about 1.2 kilometres southwest of the municipality. By Monday morning, the fire – reported to have originally burned 500 hectares – was out of control. “The 30/30/30 rule, which firefighters use, indicated some of the worst conditions: temperatures over 30 degrees, humidity under 30% and winds over 30 kilometres per hour,” Rennie told attendees.

Fire growth over past day in orange. Away from communities tho. Warm today but lighter winds, mod humidity #ymmfire pic.twitter.com/NvXuFPycWx

Originally, on May 3, no structures were reported lost, but the fire was still out of control. More than 88,000 people were successfully evacuated with no fire-related injuries, Rennie noted, but a car crash killed two people during the evacuation. By May 23, the fire had grown up to 520,000 hectares, destroying an estimated 2,400 structures.

Before the Fort McMurray event, the 2011 Slave Lake wildfire was the most costly wildfire disaster. While the latter fire shares some similarities with the most recent one, it was quick, short-lived and primarily wind-driven, compared to the fuel-driven Fort McMurray one. In terms of spread, Rennie went on to say, the Slave Lake wildfire spread faster at 70 metres per minute with 100 kilometre wind gusts.

The session, moderated by Leigh Chalmers, a partner with PwC, also featured Paul Kovacs, founder and executive director of the Institute for Catastrophic Loss Reduction and president and CEO of the Property and Casualty Insurance Compensation Corporation, and Lapo Calamai, director of catastrophic risk & economic analysis with the Insurance Bureau of Canada. The two discussed mega cat risk, such as a catastrophic earthquake scenario.

Over 3 weeks since the #ymmfire started it continues to burn out of control. Smoke again blowing into Fort McMurray. pic.twitter.com/bUZSve8sT5

ICLR researcher Alan Westhaver is behind the security cordon in #FortMcMurray looking at why some homes didn't burn. pic.twitter.com/y5CB7WMR5O