The Co-operators General Insurance Company has estimated that the Fort McMurray wildfire will cost it between $70 million and $90 million.

While access to the affected area remains restricted, The Co-operators’ preliminary estimate indicated that the after-tax cost of the wildfire to the company’s consolidated, net of reinsurance and inclusive of reinstatement premiums, will likely amount to between $70 million and $90 million. To date, 4,376 claims have been reported to Co-operators General and its subsidiaries, including property, auto, commercial and farm insurance claims, The Co-operators said in a press release on Friday. 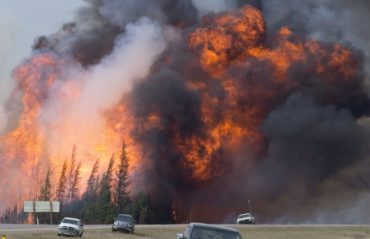 A giant fireball is seen as a wild fire rips through the forest 16 km south of Fort McMurray, Alberta on highway 63 Saturday, May 7, 2016. THE CANADIAN PRESS/Jonathan Hayward

“This has been a devastating time for the community and residents are looking forward to returning home and starting to rebuild their lives and their community,” said Kathy Bardswick, president and CEO of The Co-operators, in the release. “While the return home will mark the start of a new phase for the community, it will also be a challenging time for residents and businesses – and we will be there to help our clients through it.”

Earlier this month, Economical Insurance estimated that its pre-tax losses related to the fire would be between $35 million and $45 million, net of reinsurance recoveries and reinstatement premiums. The initial loss estimated is based primarily on claims reported to date, known exposures in the area, and reported percentage losses in various parts of the community.

Over 3 weeks since the #ymmfire started it continues to burn out of control. Smoke again blowing into Fort McMurray. pic.twitter.com/bUZSve8sT5

Intact Financial Corporation’s assessment of its insured damaged using satellite imagery and its exposure geocoding technology ranged from $1 to $1.20 per share, the insurer said on May 9.

As of 3:45 p.m. on May 23, fire conditions remained extreme in northeastern Alberta, with the wildfire remaining out of control, the Government of Alberta said in a statement that day. It was estimated to cover 522,892 hectares, including 2,496 hectares in Saskatchewan.

What you need to know before returning to #ymm & tips for cleaning your home after #ymmfire: https://t.co/jZuyBq3Hb7 pic.twitter.com/L9Ayw61nvV

May 21, 2016 – 7 p.m. A message from Bob Couture
View the re-entry maps at https://t.co/foIBgSOlFo #ymmfire pic.twitter.com/5XoTWNhFJU

May 23, 5:30 p.m.- A message from Bob Couture on smoke and hotspots in the #FortMcMurray area #ymmfire pic.twitter.com/ya5xVRuFOg

Is your vehicle still at Albian? New flights have been scheduled for vehicle retrieval. Register for a flight here: https://t.co/f7IWScFJBg

Employees visit: https://t.co/KY5X7C71r4 for information on what’s needed before returning to site. #ymmfire

Thanks to all the support, here is how we are helping #abfire #ymmfire #AlbertaStrong pic.twitter.com/Nu1CAM1B0H

Photo of our Global Technical Services adjuster Len Raymond, on site in #YMM. Air quality is a big concern.#ymmfire pic.twitter.com/4GgnS2LwVo

Still hot and dry up in #ymm. Fire fighters putting out hot spots by the entrance to the city #ymmfire pic.twitter.com/NJFoevp7cL

We’re working with our partners from across Canada and beyond to fight #ymmfire. Thank you for your support. pic.twitter.com/njlSvIQXxm