Slightly more than one in four (26% of) Canadians said they “couldn’t wait” for the day when driverless cars would become a reality, according to newly released survey results from Kanetix.ca, an online comparison site for insurance, mortgages and credit cards. 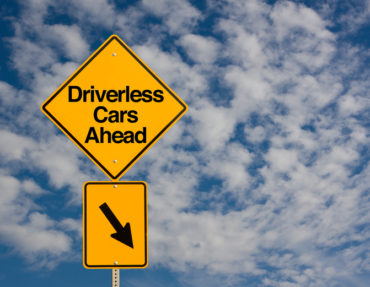 The latest survey, released on Wednesday, is similar to last year’s results, which found that 25% of respondents were looking forward to autonomous vehicles. The Kanetix survey was conducted online in December 2016, with a nationally representative sample of 1,000 Canadians. A sample of this size is accurate to within +/-3 percentage points, 19 times out of 20.

Many drivers remain neutral on the idea of driverless vehicles, the study found, with 56% saying it would depend on the technology and how well it works, compared to 52% last year. Only 18% said “no thanks, they love driving too much,” down from 23% last year, Kanetix said in a press release. And, perhaps not surprisingly, the younger demographic (age 18 to 34) are the most excited about driverless cars, with 36% saying they can’t wait for the day, Kanetix reported.

“Technology is continually improving and innovating, and we’ve already seen auto manufacturers incorporate self-driving safety aspects in some existing vehicles, such as automatic emergency braking (AEB) or sensors that temporarily control steering to avoid collisions,” said Andrew Lo, chief operating officer and tech expert at Kanetix.ca. “It’s still a jump for most people to make in terms of going completely driverless but Canadians are interested in these improved safety features and, as a result, seem willing to slowly adopt more automated functions.”

Indeed, the survey found that 59% of Canadians would buy or lease a car with improved self-driving safety features – such as front crash prevention, adaptive cruise control, lane departure warning and blind spot detection, to name just a few. Some features could even help lower auto insurance premiums, Kanetix added. 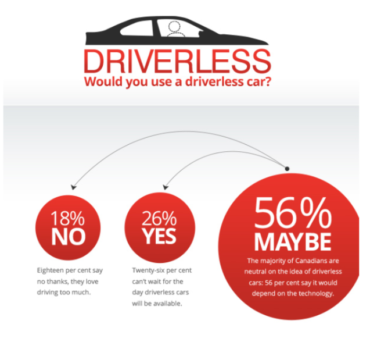 “Some of these improved safety features have caught the eye of insurers,” Lo said in the release, noting that Aviva Canada recently announced that policyholders who drive vehicles equipped with AEB will be eligible to receive a 15% discount on their auto insurance rates. “It’s expected that more insurers will follow,” Lo said.

But while Canadians may not be entirely ready for a fully driverless experience, the overwhelming majority increasingly believe that autonomous cars will have a positive impact on the road, the survey said. Eighty-one per cent agreed that it will eliminate the threat of distracted driving, 73% said it will reduce accidents and auto-related fatalities, and 68% agreed it will increase safety for pedestrians and cyclists. Less than half, however, felt that reduced traffic will be a benefit.

From a regional perspective, Quebecers are the most likely (71%) to say that driverless cars will bring an improvement, while only 55% in Atlantic Canada agree.

“In any case, Canadians feel they have plenty of time before driverless cars will be available to the public; 80 per cent say it won’t happen for another 15 or more years,” the release concluded.

The survey was released in advance of this year’s Consumer Electronics Show in Las Vegas, running from Jan. 5 to 8.