Nearly four in five polled Canadians (78%) in Newfoundland and Labrador, Ontario and Alberta said they want to see a technology solution that would stop distracted driving by disabling texting and other functions while the driver is behind the wheel, a new opinion poll from Aviva Canada has found. 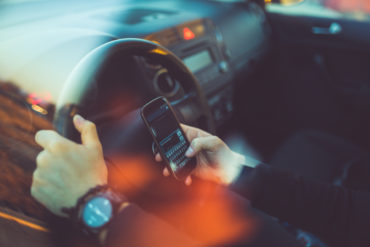 Results of the online poll of 1,504 Canadians – conducted by Toronto-based Pollara Strategic Insights between Aug. 8 and 13 – were released on Thursday. Respondents had to be at least 18 years of age and have at least one of either an auto or home insurance policy. The margin of error for a probability sample of 1,504 is ±2.5%, 19 times out of 20.

According to the survey, 95% of respondents – 598 in Ontario, 603 in Alberta and 303 in Newfoundland and Labrador – said that texting and driving by others makes them feel unsafe on the roads. A total of 88% of those polled reported witnessing other drivers texting while driving, while only 22% (16% in Newfoundland and Labrador, 27% in Ontario and 21% in Alberta) admitted texting while driving themselves, Aviva Canada said in a press release.

“For the first time, what we are seeing is that Canadians don’t think social persuasion or law enforcement strategies against distracted driving are working, and they feel technology is the only realistic answer,” Aviva Canada president and CEO Greg Somerville said in the release.

Canadians are aware of efforts to socially stigmatize distracted driving, the poll found, and they are also aware of increased penalties and demerit points. However, 47% of Canadians think fines and demerits are a deterrent, while only 32% said they think peer pressure will work.

Instead, 78% (90% in Newfoundland and Labrador, 73% in Ontario and 76% in Alberta) “feel that insurance companies, auto manufacturers and government should begin immediately to find a technology solution to limit distracted driving,” the poll said. “This week (Sept. 19) Apple’s new iOS operating system debuted a ‘do not disturb while driving’ feature,” Aviva Canada added in the release. “This is progress as almost three-quarters of Canadians (73 per cent) in our poll said they would use anti-texting technology.” 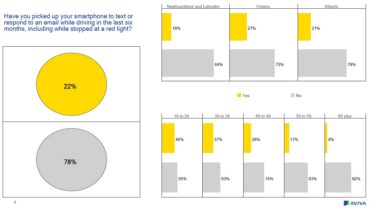 In mid-July, eBrake Technologies Inc., a mobile app development company founded in Vancouver in June 2016, announced a pilot program that will offer a smartphone app designed to prevent distracted driving. Designed for Android and iOS smartphones, eBrake locks any device it is installed on and blocks incoming notifications when it detects vehicle-related motion, the company reported at the tip. To unlock the device, a user must complete a “patent pending Passenger Unlock Test, something a driver cannot complete while driving.”

The release of the poll came one day after Ontario’s Ministry of Transportation (MTO) released further details on its planned road safety legislation this fall, including the creation of a new offence for careless driving causing death or bodily harm. If passed, the new legislation would help protect pedestrians and cyclists and reduce the number of people killed or injured by impaired, distracted and dangerous drivers, MTO suggested in a statement. The proposed measures include: