MONTREAL – Environment Canada says a tornado touched down in a Quebec town during intense thunderstorms that caused considerable damage in different parts of the province, including the felling of century-old trees in Montreal. 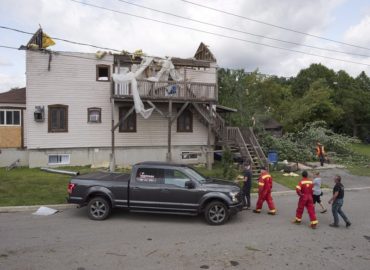 Residents survey the damage from a category one tornado, Wednesday, August 23, 2017 in Lachute, Que., northwest of Montreal.THE CANADIAN PRESS/Ryan Remiorz

Meteorologist Amelie Bertrand said Wednesday a team dispatched to Lachute confirmed an EF-1 tornado with winds reaching about 175 km/h struck in the town about 85 kilometres north of Montreal.

Bertrand said an EF-1 tornado can cause wind gusts ranging from about 135 to 175 km/h, placing Tuesday’s tornado at the higher end of the scale. Observers saw roofs ripped from homes, siding torn from buildings and trees uprooted.

Lachute officials said the tornado struck at about 6:15 p.m., damaging about 150 residences, including around 10 that are now uninhabitable. There were no serious injuries.

The tornado was the sixth reported so far this year in Quebec.

“Usually Quebec has about six tornadoes per summer, so it would be right at the mean,” Bertrand said. “It doesn’t mean we won’t get other severe thunderstorms later in August or September, because the season extends from May to September.”

Meanwhile, crews were cleaning up elsewhere in Quebec, including the Montreal neighbourhood of Notre-Dame-de-Grace (NDG) where a microburst generating 120 km/h winds knocked down trees, caused property damage and cut power.

Borough mayor Russell Copeman said the storms cut a swath through a 20-block section of the area, decimating 100-year-old trees at a popular local park.

“Where it ran through, the damage is comparable to the ice storm of 1998,” Copeman said in an interview. “It’s a much more limited area, but where this microburst hit, we have dozens and dozens of mature trees down.”

Copeman said securing streets and sidewalks will take a few days, while debris and branches in some areas can only be removed under Hydro-Quebec supervision.

“There are going to be felled branches and debris on our streets for weeks to come,” he said.

Not where you want to find your trampoline.Environment Canada confirms #Lachute was hit with a strong F1 tornado. pic.twitter.com/boxOAalh3k

Hydro-Quebec said about 115,000 customers lost power at the peak of the severe weather and that some 12,000 remained without electricity as of late Wednesday afternoon.

The majority of customers were expected to be restored by the end of day as 250 crews worked around the clock, but the utility warned it could take a bit longer in some cases.

Hydro-Quebec spokesman Serge Abregel said one street in NDG saw half its trees crash to the ground as well as having four hydro poles knocked down, wires and all.

“We saw extreme wind gusts yesterday … so the damage to the network was extensive,” Abregel said.

Prayers and thoughts of those in Lachute Quebec due to tornado pic.twitter.com/qMvQakEPOw

The tornado's winds in Lachute were so powerful that they drove a nail right through this teeter-totter seat. pic.twitter.com/3BHjmyhmMF