Aviva Canada Inc. announced on Monday that it launching a new “tennis-focused brand experience for home and auto insurance through an extended partnership” with Tennis Canada. 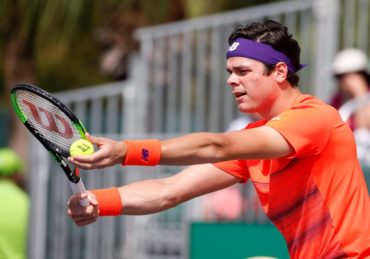 Milos Raonic, of Canada, prepares to serve during a tennis match against Viktor Troicki, of Serbia, at the Miami Open, Friday, March 24, 2017 in Key Biscayne, Fla. (AP Photo/Wilfredo Lee)

The Tennis Canada Home and Auto insurance program for both fans and players alike “powered by Aviva will provide exceptional insurance coverage at a competitive price through an easy-to-use digital experience,” with sales and service provided by SmartCoverage Insurance Services Inc., Aviva Canada said in a press release.

This program, targeted to all Ontario tennis club members and fans, is available through Aviva and its broker partners. The aim is for the program to be available to all tennis enthusiasts in 2018, Aviva Canada reported.

To support tennis at the grassroots level, members will have a chance to win a contest to host tennis star Milos Raonic at their club. Raonic, currently the number six-ranked player in the world, serves as a brand ambassador for Aviva.

“This program is about matching the passion and commitment of tennis players and fans with the dedication we bring to serving our home and auto insurance customers,” said Jason Storah, executive vice president of broker distribution with Aviva Canada, “and it’s available to all of our brokers across Ontario.”

“We are absolutely delighted to expand our relationship with Aviva Canada in a way that benefits tennis at a very grassroots level,” said Rob Swann, chief commercial officer with Tennis Canada, in the release. “Aviva Canada is an outstanding partner with Tennis Canada and together we will continue to grow the great sport of tennis across the country.”

The partnership came about four months after the insurer announced on Jan. 18 that it was offering “team-branded” home and auto insurance directly to fans of Toronto’s Raptors and Maple Leafs sports teams. That prompted Insurance Brokers Association of Ontario (IBAO) CEO Colin Simpson to say in a media release that it would be formally suspending its sponsorship partnership with Aviva Canada “for the foreseeable future.” Simpson argued at the time that “Aviva continues to leverage the Aviva brand for broker-distributed products and direct-to-consumer products, with an inconsistency around product availability and pricing – a strategy the IBAO believes promotes confusion for consumers.”

In late March, the board of directors of the Insurance Brokers Association of New Brunswick (IBANB) said that it had also “voted to suspend a longstanding sponsorship partnership with Aviva Canada.”

Both brokers associations continue to have discussions with Aviva Canada.