CAA says driving has dropped. By how much?

CAA Insurance has seen driving halved since the start of the COVID-19 pandemic, according to its president.

Through its pay-as-you-go program, MyPace, and what customers have told the insurer about the number of kilometres they are now travelling, CAA president Matthew Turack said the insurer has seen driving drop by about 50% over the past year.

COVID-19 was declared a global pandemic last March. Almost one year later, 87% of the Canadian P&C industry is working from home to prevent the spread of the virus, according to the results of a Canadian Underwriter online survey of more than 1,150 P&C insurance professionals conducted in mid-January.

“We definitely see people staying home and not commuting as much to work,” Turack told Canadian Underwriter, commenting more broadly on the general habits of consumers and not on the CU survey results.

There’s little to suggest things will change drastically in the near future, at least when it comes to customers travelling to the office, Turack observed. He’s heard from employers that they’re opting to keep their employees safe and let them work from home.

“That means there’s less driving, less commuting to work,” Turack said. “There will be less driving.”

Things will change as we continue to progress through the pandemic, he acknowledged. Restrictions will loosen, but they could also tighten again if infection rates continue to climb. 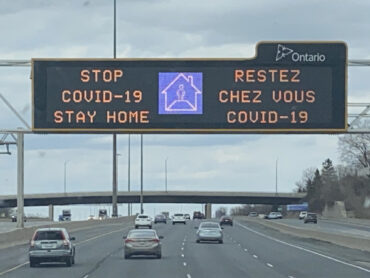 “It’s hard to predict what’s going to come in the next few months, but we know people are affected and have changed their pre-pandemic behaviours to make sure that they’re staying safe,” Turack said in an interview. “They’re not going out; they’re limiting their exposures. They’re making sure that when they do go out, it’s a safe environment and [they’re] wearing masks and social distancing.”

Even when things return to some level of normal, he still expects driving to be below what was seen before the pandemic started. That’s why CAA announced last week that it was reducing premiums again for its customers — 15% for a 12-month term for new customers, effective Apr. 15, and for existing customers who renew on or after June 15.

“Whether it’s 50% or 25% [reduced driving], that still has an impact on frequency of claims,” Turack said. “We do see that reduction and, therefore, that’s exactly why we can give relief. And we believe that relief is justified and valid.”

CAA’s announcement was the fourth installment of financial relief that the insurer has provided to its Ontario auto policyholders since the start of the pandemic. (Full details of the latest relief announcement from CAA and other insurance companies can be found here.)

Looking at 2021, Turack said, the insurer asked itself: “Okay, is the pandemic still going to affect us as much as it did in 2020? And how do we help policyholders?’”

The company chose a percentage amount, as opposed to cutting a cheque for a specific dollar amount, so that the discount could affect an entire year’s policy, he noted.

He pointed out that brokers, who earn commisions on sales, would not be affected by the reduced premium offered to clients.