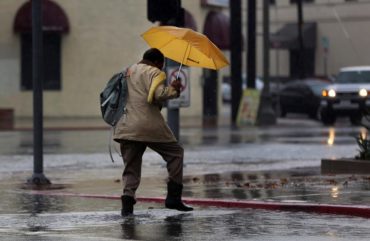 A pedestrian walks into deep water downtown Los Angeles, Friday, Jan. 20, 2017. The second in a trio of storms has arrived in California. Rain, heavy at times, is overspreading the state early Friday and a flash flood warning has been issued for southeastern Sonoma County. Storm warnings are posted up and down the Sierra Nevada and across the mountains of Southern California. (AP Photo/Damian Dovarganes)

On Monday, Brown issued two emergency proclamations to secure funding to help communities respond to and recover from severe winter storms that have caused flooding, mudslides, erosion, debris flow and damage to roads and highways, the governor said in a press release. The proclamations, which also direct the Governor’s Office of Emergency Services to provide assistance to local governments, relate to storms in December and January.

Preliminary damage estimates for the January storms are at least “tens of millions of dollars,” the release noted.

The Public Works Agency of Alameda County, one of the counties under the states of emergency, noted in a statement issued Monday that two roads remain closed due to localized flooding. Another county, San Joaquin County, which is not under a state of emergency, reported five flooded roadways and one flooded underpass. And throughout the state, the inclement weather produced a massive mudslide that pushed up to five feet of mud across Highway 58, trapping cars and forcing crews to close the highway in both directions.

Late Monday, the Associated Press reported that the body of a missing man was found after stormwater receded in the Harbor City area of Los Angeles. At least four people have died so far as a result of the storm, which lashed California with thunderstorms, hail and severe winds, and several others were missing.

The National Weather Service warned that the weather system could be among the strongest storms in years. According to the Associated Press, Long Beach Airport received 3.87 inches of rain by 5 p.m. on Sunday, breaking the all-time daily record for rainfall. Los Angeles Airport got 2.78 inches, another single-day record.