TORONTO – Panic about how the oil price shock could affect the banks’ bottom lines has subsided, as several of the country’s largest financial institutions reported better-than-expected third-quarter results. 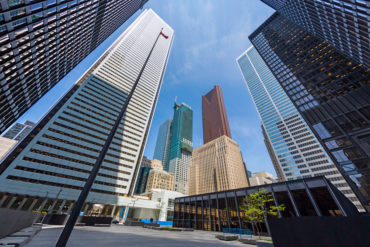 CIBC (TSX:CM) reported that its quarterly profit climbed nearly 50 per cent from a year ago to $1.44 billion, although much of the jump came from the sale of its minority stake in American Century Investments.

Without the gains from the sale, the bank says its profit was up eight per cent to $1.07 billion from $990 million.

That’s in spite of headwinds such as rock-bottom interest rates, slowing loan growth and the sluggish economy, which have been dampening the outlook for the sector in recent quarters.

“We’re very pleased with our performances this quarter, which was achieved against a backdrop of an economic environment that remains challenging and the volatile market conditions coming out of the Brexit vote,” CIBC CEO Victor Dodig said during a conference call Thursday to discuss the bank’s results.

“Although we can’t control the economy or the interest-rate environment, what our team at CIBC can do is control our strategy to remain profitable and to continue to grow under these conditions.”

Over the last few quarters, Canadian banks have been setting aside more money for bad loans to companies in the oilpatch, but that trend has now begun to reverse, with some banks reporting lower provisions for credit losses.

“The material decline in provisions for credit losses was driven by the fact that essentially none were taken in the quarter for energy loans,” Aiken said in a note to clients.

Meanwhile, TD Bank (TSX:TD) saw its third-quarter profit rise four per cent from a year ago to $2.36 billion, partly thanks to strong earnings from its U.S. retail banking operations.

That’s compared to the $2.27 billion the bank earned during the same quarter last year.

“Looking ahead, the environment is likely to remain volatile,” TD’s CEO Bharat Masrani said during a conference call to discuss the bank’s results Thursday.

“The global economy is adjusting to the fallout from Brexit, low or negative interest rates and still sluggish GDP growth. In Canada, the economy lost steam in the second quarter, and there has been heightened concern about the Vancouver and Toronto housing markets … Amid these shifting conditions, our North American platform and diversified business mix position us well.”

The bank’s chief risk officer, Mark Chauvin, noted that the price of oil has stabilized in the $40 to $50 range, which helped prevent loan losses in the energy sector.

Provisions for credit losses were $556 million, down from $584 million in the previous quarter.

“Credit was reasonably benign, with provisions for energy easing, similar to most of the banks so far this quarter, and no discernible deterioration in consumer credit,” Aiken said.

Earlier this week, the Bank of Montreal (TSX:BMO) reported that its third-quarter profit grew four per cent to $1.25 billion, while Royal Bank grew its profit by 17 per cent from a year ago to $2.895 billion – partly due to the sale of an insurance business.

Another theme that has emerged during this week’s conference calls has been the real estate market and what impact a correction in housing prices could have on the banks’ portfolios of mortgage loans.

RBC CEO David McKay said Wednesday that the lender is “closely monitoring” the Toronto and Vancouver housing markets, where prices have been soaring at what some consider an unsustainable pace.

On Thursday, CIBC chief risk officer Laura Dottori-Attanasio told analysts that if house prices fall by 30 per cent and unemployment climbs to 11 per cent, CIBC’s mortgage losses would be less than $100 million.

That’s according to stress tests, which banks routinely perform to gauge how their loan books would perform under various economic scenarios.

The earnings season will wrap up next week, with Scotiabank (TSX:BNS) reporting its results on Tuesday and National Bank (TSX:NA) slated to follow on Wednesday.