The City of Vancouver has filed with the Federal Court of Appeal an application for a judicial review of the National Energy Board’s (NEB) decision to conditionally recommend Kinder Morgan’s pipeline expansion project, contending that it is both invalid and unlawful. 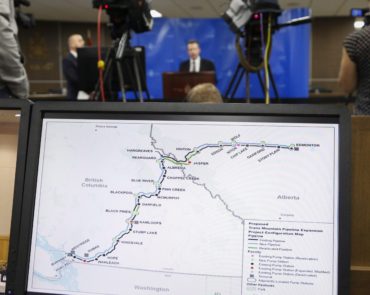 The City of Vancouver said in a statement on Monday that throughout the NEB review process, the city and “many other intervenors” have raised significant concerns about its “flawed process” which “excluded any opportunities for oral cross-examination of experts and evidence; provided inadequate information sharing; and failed to properly consult affected communities along the pipeline and tanker route.”

Mayor Gregor Robertson said in the statement that an expanded Kinder Morgan pipeline is not in Vancouver or Canada’s economic or environmental interest. “The National Energy Board failed to properly and thoroughly consult local communities on the pipeline and tanker route, ignoring key pieces of scientific evidence showing the potential for real and catastrophic damage to local waters in the event of an oil spill, and the impact of an expanded pipeline on greenhouse gas emissions both locally and abroad,” he said. “Vancouver still has significant concerns about Kinder Morgan’s expansion and we’ve concluded it’s simply not worth the risk to our environment or economy.”

In the city’s application, it outlined that the NEB failed to comply with the requirements of the NEB Act by ignoring key pieces of evidence submitted that supported the position that existing and planned government policies and regulations to limit or reduce greenhouse gas (GHG) emissions in destination markets will result in substantial reduction in oil consumption over the lifetime of the project and a decline in demand for Alberta oil sands bitumen. As well, lower oil prices and falling demand for Alberta oilsands bitumen means that there will be no need for the project’s expanded pipeline capacity, the application said, adding that the NEB failed to consider upstream and downstream GHG emissions from the project.

The city also sought a declaration that the NEB did not comply with its duties under sections of the Canadian Environmental Assessment Act (CEAA) through its failure to appropriately consider:

“Furthermore, the NEB’s refusal to allow oral cross-examination of experts was contrary to principles of natural justice and procedural fairness that it was required by law to observe,” the statement said. “In addition to the judicial review, we are also asking the court to stop the federal government from making any decisions on Kinder Morgan’s proposal until the NEB’s assessment of the project has been completed in accordance with the NEB Act and the CEEA.”

Feedback on the pipeline expansion can be provided at https://notworththerisk.vancouver.ca/.

In August of 2015, two environmental groups – the Wilderness Committee and the Canadian Parks and Wilderness Society (CPAWS BC Chapter) – and 33 individuals publicly withdrew from the regulatory hearings “due to a flawed and biased process.” In a letter of withdrawal to NEB secretary Sherri Young, the groups and individuals charged that the “review has discounted and devalued expert evidence, most specifically the knowledge of the lands and territories the pipeline will pass through, and the likely impact it will have on our waters and salmon. It has under-resourced [First] Nations and Bands, thereby ensuring an unbalanced and ill-informed hearing.” The exclusion of any discussion on climate impacts and the failure of the right to cross-examine Trans Mountain were also cited as concerns.

On May 19, the NEB recommended the approval of the Kinder Morgan expansion project, subject to 157 conditions. The conditions include regulatory and/or overarching requirements, as well as requirements pertaining to project engineering and safety; emergency preparedness and response; environmental protection; people, communities and lands; economics and financial responsibility; and, project-related marine shipping.