Federal rail safety bill would set ‘strict criteria’ on how locomotive voice and video recorder data could be used: Garneau

Canada’s transport minister says federal legislation mandating locomotive voice and video recorders would, if passed into law, give the rail industry “opportunities to mitigate risks” but an opposition MP recently warned such a law could violate employees right to privacy. 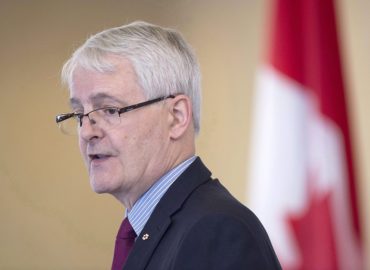 Federal Transport Minister Marc Garneau delivers a speech on the Transportation Modernization Act and the Ocean Protection Plan at a business luncheon in Halifax on Tuesday, May 23, 2017. THE CANADIAN PRESS/Andrew Vaughan

Bill C-49, the Transportation Modernization Act, was the subject of debate June 16 on Parliament Hill.

If passed into law, the Transportation Modernization Act would “amend the Railway Safety Act to require that railway locomotives be fitted with voice and video recorders,” federal Transport Minister Marc Garneau said earlier.

But that provision is really about “supervising workers in the workplace and tramping on their right to privacy in the workplace,” claimed Daniel Blaikie, NDP MP for Elmwood-Transcona, Manitoba.

“We know that in terms of railway safety, the predominant issue has to do with fatigue management,” Blaikie said June 16.

Crew fatigue is one of 10 issues on TSB’s watch list, released Oct. 31, 2016, but so is the lack of mandatory on-board voice and video recorders on locomotives.

The watch list is comprised of issues in the transportation sector that TSB says need to be addressed. TSB is a separate organization from Transport Canada.

The proposal in Bill C-49 to mandate locomotive voice and video recorders “addresses a key safety issue,” TSB said in a release in May.

TSB – which investigates incidents in marine, aviation, pipeline and rail – recommended in 2013 that the federal government “require that all controlling locomotives in main-line operation be equipped with in-cab video cameras.” TSB made that recommendation was made in an investigation report into a derailment in 2012 that killed three crew members.

A VIA passenger train derailed near Aldershot, Ont., northeast of Hamilton, on its way to Toronto. The train had been travelling 67 miles per hour in a 15 mph zone. TSB said in its report that the operating crew “may have … misinterpreted” that a railroad track signal displayed the “advance clear to limited” rule. However, TSB added in its report that the absence of voice and video recordings from the cab “left a number of questions unanswered and represents a lost opportunity to mitigate potentially serious crew resource management issues in the industry.”

Making locomotive recorders mandatory “would strengthen rail safety by providing objective data about crew actions leading up to, and during, a rail accident,” Garneau told the House of Commons June 5 when he tabled Bill C-49 for second reading. “Beyond that, the requirement would also increase opportunities to mitigate risks and prevent accidents from occurring.”

The proposed amendment to the Railway Safety Act “would not only require companies to install the recorders,” Garneau continued. “It would limit how the recorded data could be used, within strict criteria. For instance, while the Transportation Safety Board would have access to recorded data for post-accident investigations, Transport Canada and railway companies would also have access to the data for proactive safety management, and for following-up on incidents and accidents not investigated by the Transportation Safety Board.”

Those limits on the use of data “are designed to maximize the safety value of this technology while limiting its potential to infringe on employees’ privacy rights,” Garneau added.