The first above-normal Atlantic hurricane season since 2012 has produced five landfalling storms in the United States, the National Oceanic and Atmospheric Administration (NOAA) said on Wednesday. 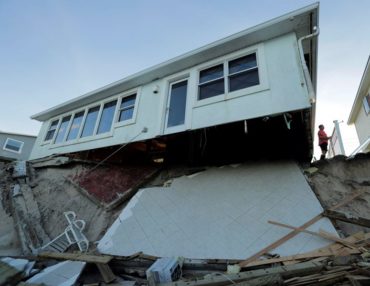 The Atlantic, eastern Pacific and central Pacific 2016 hurricane seasons ended on Nov. 30, with NOAA scientists noting in a statement that all three regions saw above-normal seasons.

For the Atlantic, this was the first above-normal season since 2012. The Atlantic saw 15 named storms during 2016, including seven hurricanes (Alex, Earl, Gaston, Hermine, Matthew, Nicole and Otto), three of which were major hurricanes (Gaston, Matthew and Nicole). NOAA noted that its updated hurricane season outlook in August called for 12 to 17 named storms, including five to eight hurricanes, with two to four of those predicted to become major hurricanes.

Several Atlantic storms also made landfall outside of the U.S. during 2016: Tropical Storm Danielle in Mexico; Hurricane Earl in Belize; Hurricane Matthew in Haiti, Cuba, and the Bahamas; and Hurricane Otto in Nicaragua. 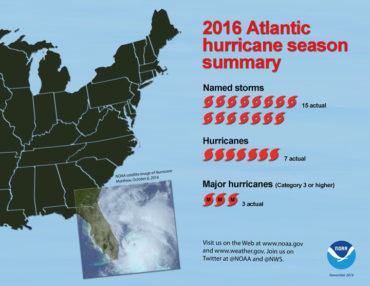 The strongest and longest-lived storm of the season was Matthew, which reached maximum sustained surface winds of 160 miles per hour and lasted as a major hurricane for eight days from Sept. 30 to Oct. 7. Matthew was the first Category 5 hurricane in the Atlantic basin since Felix in 2007.

Matthew caused storm surge and beach erosion from Florida through North Carolina, and produced more than 10 inches of rain, resulting in extensive freshwater flooding over much of the eastern Carolinas. The storm was responsible for the greatest U.S. loss of life due to inland flooding from a tropical system since torrential rains from Hurricane Floyd caused widespread and historic flooding in eastern North Carolina in 1999, NOAA said.

“The strength of Hurricane Matthew, as well as the increased number of U.S. landfalling storms this season, were linked to large areas of exceptionally weak vertical wind shear that resulted from a persistent ridge of high pressure in the middle and upper atmosphere over Caribbean Sea and the western Atlantic Ocean,” said Gerry Bell, lead seasonal hurricane forecaster at NOAA’s Climate Prediction Center. “These conditions, along with very warm Caribbean waters, helped fuel Matthew’s rapid strengthening.” 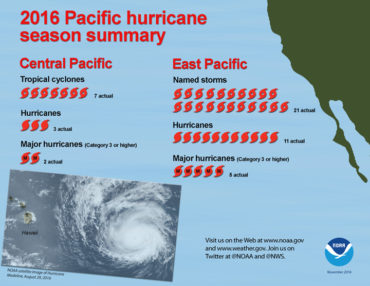 The central Pacific hurricane basin, which covers the Pacific Ocean west of 140 degrees west to the International Date Line, saw seven tropical cyclones (including tropical depressions and named storms) during 2016. All seven became named storms, and included three hurricanes of which two were major hurricanes. Tropical Storm Darby made landfall on the Big Island of Hawaii, marking the first time in recorded history that two storms in three years struck the Big Island (Darby in 2016 and Iselle in 2014). NOAA’s central Pacific hurricane season outlook called for four to seven tropical cyclones, which does not predict specific ranges of named storms, hurricanes and major hurricanes.