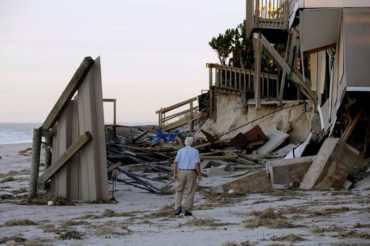 That being the case, A.M. Best reports it does not anticipate a significant number of related rating actions from the hurricane.

Matthew hit Haiti, Cuba, Jamaica, the Dominican Republic, the Bahamas and islands in the Caribbean, before moving toward Florida and along the southeastern coastline of the United States in October.

“Many top homeowners/farm owners and automobile writers in the affected states have diverse geographic footprints and product profiles, in addition to possessing an appropriate level of risk-adjusted capitalization,” explains a press release Monday from the insurance rating and information source.

“Solid overall risk management profiles and capabilities, inclusive of comprehensive reinsurance programs, should help ensure that these organizations are adequately protected from the potential losses to emanate from the storm,” the statement adds.

While Matthew’s impact on these organizations is more likely a notable effect on Q4 earnings than on overall balance sheet strength, that may not be the case for smaller, more geographically concentrated property insurers with exposure in the affected areas, A.M. Best reports.

For these organizations, “due to the potentially large volume of claims reported, it most likely will take longer to determine the extent of the losses,” it is possible Matthew will have an adverse effect on earnings and capitalization.

Related: Estimated insured losses from Hurricane Matthew for U.S., Caribbean between US$2.8 billion and US$8.8 billion: AIR

By state, AIR reported at the time that Matthew’s effects included downed trees, powerlines and signs, stripped off awnings, siding and other non-structural building features, eroded beaches and washed away boats and automobiles, and roofs peeled off many homes and businesses in Florida; a dome of water pushed into river inlets and low-lying areas near Savannah and more than a foot of rain in some locations, leaving roads, homes and businesses inundated, in Georgia; and surge damage and damage to marinas on Hilton Head Island experience and flooding to much of downtown Charleston in South Carolina.

Earlier, Karen Clark & Company released a flash estimate that U.S. insurers could pay about US$7 billion for storm surge, inland flooding and wind damages from Matthew.

And the Associated Press, citing a state estimate, reported Monday that Matthew-related flooding has caused US$1.5 billion in damage to 100,000 homes, businesses and government buildings in North Carolina.

With floodwaters yet to recede in some communities, officials say the number could fluctuate, the media report adds.

A.M. Best reported Monday that while initial indications are that total losses will be within established catastrophe reinsurance limits for firm -rated entities, “regardless of the size of the carrier, reinsurance coverage and risk concentration parameters will have a material influence on mitigating the impact of the hurricane losses.”

Hermine in September – the first hurricane to make landfall in Florida in a decade – followed in October by Matthew “are stark reminders of the damage to which property/casualty insurers can be exposed,” A.M. Best points out.

“It also brings into focus the need for companies to continue employing prudent risk management practices that adjust as risk factors such as business profile and company retentions shift over time,” the firm adds.

“Hermine made landfall as a Category 1 hurricane in the Florida panhandle area, causing heavy flooding and river swelling in a modestly populated area but relatively modest insured losses,” notes an early-October statement from A.M. Best.

Pointing out that tropical storm activity in Florida had been relatively calm in recent years, “prior to 2016, the last direct landfall of a hurricane strength storm (winds greater than 75 mph) in Florida was Hurricane Wilma, a Category 3 hurricane in 2005, though other tropical storms and passing hurricanes have impacted Florida with heavy winds, rain and storm surge in each year since,” A.M. Best stated at the time.