RALEIGH, N.C. – Flooding spawned by Hurricane Matthew has caused $1.5 billion in damage to 100,000 homes, businesses and government buildings in North Carolina, according to a state estimate. 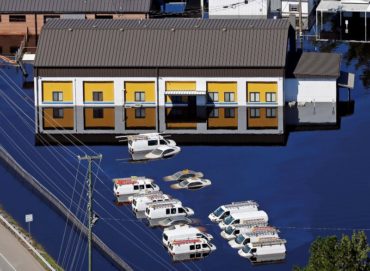 Vehicles at a business are surrounded by floodwaters from Hurricane Matthew in Lumberton, N.C., Wednesday, Oct. 12, 2016. People were ordered to evacuate, and officials warned that some communities could be cut off by washed out roads or bridge closures. (AP Photo/Chuck Burton)

The figure released late Saturday represents one of the first detailed analyses of damage from the storm, and it’s part of a growing picture of Matthew’s financial impact.

With floodwaters yet to recede in some communities, officials say the number could fluctuate.

Related: Estimated insured losses from Hurricane Matthew for U.S., Caribbean between US$2.8 billion and US$8.8 billion: AIR

“I do think that there may be more out there,” John Dorman, an assistant state emergency management director, said of whether the number could grow.

Dorman said the state’s computer modeling combines property records, topography and stream gauges to estimate how many feet of water have affected a given building – and how much damage that water caused. The state also used manned aircraft and drones to verify projections.

The figure released this weekend is one piece of the overall picture of how the storm affected the state. For example, it doesn’t include the cost of repairing damaged roads and bridges or replacing belongings inside damaged buildings, which are often covered by insurance policies.

Early next week, North Carolina Gov. Pat McCrory plans to release a detailed plan of how North Carolina will rebuild, including how to pay for the effort.

Even before the extent of the flooding was known, real-estate and insurance research firms had estimated that damage from Hurricane Matthew would be at least several billion dollars across multiple states.

In North Carolina, the hurricane dumped more than a foot of rain 100 miles inland, causing massive flooding in the eastern part of the state. Towns such as Princeville, Lumberton and Fair Bluff were inundated.

Hurricane Matthew was blamed for killing at least 43 people in the United States – 26 of them in North Carolina – with most deaths caused by flooding. In Haiti, at least 500 storm-related deaths were reported.

The computer mapping project began in the years after Hurricane Floyd in 1999. The state remapped North Carolina’s flood plains and collected data on more than 5 million buildings in the state.

“This is also helping to save lives and be operational, as opposed to just damage information,” Dorman said.