Insured residential, commercial property losses from Hurricane Matthew estimated to be US$4 billion to US$6 billion: CoreLogic

Insured property losses for both residential and commercial properties from Hurricane Matthew are estimated to be between US$4 billion and US$6 billion from wind and storm surge damage, according to CoreLogic, Inc. 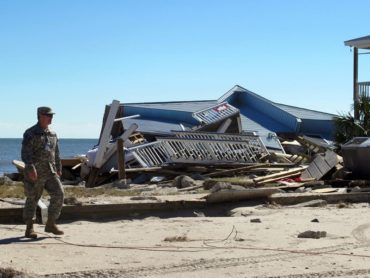 The wreckage of a house destroyed by Hurricane Matthew is seen in Edisto Beach, S.C., on Monday, Oct. 10, 2016. Town officials say the storm washed between 3 and 4 feet of sand onto the ocean front street and the community took its worst hurricane hit since Hurricane David back in 1979. (AP Photo/Bruce Smith)

Of this estimated loss, 90% of the insurance claims are expected to be related to wind and 10% related to storm surge, CoreLogic, a global property information, analytics and data-enabled solutions provider, said in a press release on Saturday. The estimate does not include insured losses related to additional flooding, business interruption or contents.

In addition, CoreLogic estimates about 1.5 million residential and commercial properties are expected to impacted from wind and storm surge from the hurricane. “The fact that structures in the region are comprised primarily of masonry, wood and veneers, coupled with the stringent Florida building codes, helps reduce total insured property losses compared with other memorable storms,” CoreLogic said. 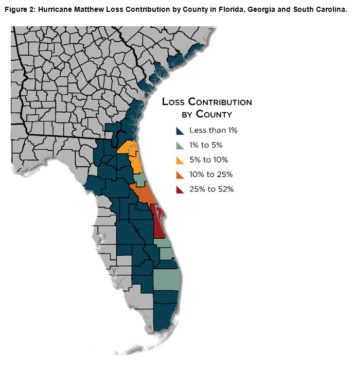 According to the Associated Press, Hurricane Matthew has claimed the lives of more than 500 people in Haiti and at least 23 in the United States – nearly half of them in North Carolina. At least three people were missing. In addition to the 14 storm-related deaths in North Carolina, there were five in Florida and three each in Georgia and South Carolina. One death was also reported in Virginia.

Related: Nearly 2 million homes in Florida, the Carolinas and Georgia at risk of storm surge damage from Hurricane Matthew: CoreLogic

As of Sunday, Post-Tropical Cyclone Matthew, located approximately 165 kilometres east of Cape Hatteras, North Carolina, was tracking east at about 24 kilometres per hour (kph), Impact Forecasting, Aon Benfield’s catastrophe model development team, said in a statement that morning. Despite the change in the cyclone’s structure over the past 24 hours, Matthew continued to produce an area of very strong winds. Sustained winds of up to 110 kph, with gusts above hurricane force were reported at several coastal marine observing stations near the Outer Banks of North Carolina on Sunday morning, Impact Forecasting said.

The forecast models indicate that the post-tropical cyclone will gradually weaken during the next 24 to 36 hours, and be absorbed by a frontal boundary in about 48 hours. Rainfall will diminish across the coastal mid-Atlantic by early afternoon, the statement said, although swells generated by Matthew will continue to affect much of the southeastern and mid-Atlantic coasts of the U.S. during the next couple of days.