Boston-based catastrophe risk management firm Karen Clark & Company (KCC) has estimated insurers will pay about US$7 billion for damages in the United States as a result of Hurricane Matthew. 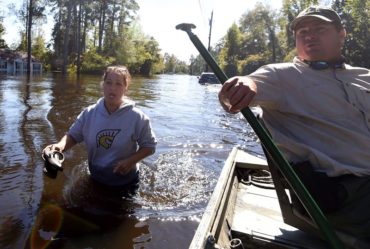 Natalie McDowell, left, speaks with Rawlings LaMotte as she walks to her flooded home on Tuesday, Oct. 11, 2016, in Nichols, S.C. About 150 people were rescued by boats from flooding in the riverside village of Nichols on Monday. (AP Photo/Rainier Ehrhardt)

Total losses, including damage to building, contents, time element and auto losses, are estimated at US$16.31 billion, including US$12.60 billion for inland flooding, US$3.48 billion for wind and US$0.23 billion for storm surge, KCC said in the report. The total losses do not include damage to boats, infrastructure and coastal structures, including beaches and boardwalks.

Although the hurricane caused extensive damage in Haiti and the Bahamas before tracking north off the coast of southeast Florida, the report focuses on damages and losses in the U.S. only, KCC said, noting that the hurricane was initially project to impact Florida with Category 4 winds. Matthew stayed further off the Florida coast than projected and maximum winds experienced along the coast were Category 2 strength and below; Matthew also made a brief landfall in South Carolina as a Category 1 hurricane.

According to the KCC report, the most significant damage from Hurricane Matthew was caused by extensive inland flooding, particularly in North Carolina. Storm surge was experienced along the coastlines of Florida, Georgia, South Carolina and North Carolina, “but because of the coast parallel track, major storm surge damage was avoided.”

The Associated Press said on Tuesday that Hurricane Matthew has claimed the lives of more than 500 people in Haiti and at least 23 in the U.S. – nearly half of them in North Carolina. At least three people were missing. In addition to the 14 storm-related deaths in North Carolina, there were five in Florida and three each in Georgia and South Carolina. One death was also reported in Virginia.

KCC said in the report that Hurricane Matthew caused “disruption and destruction” along the U.S. coastline from southeastern Florida to Virginia over the course of several days, from Oct. 5 to 9. Hurricane force winds in excess of 74 miles per hour were experienced along limited sections of coastline, notably between Cape Canaveral and St. Augustine, Florida.

As the track of the storm veered closer to the coastline near Savannah, hurricane force winds again impacted properties along the coast, the report said, with the most impacted coastal areas including Daytona Beach, Fl., Tybee Island, Ga. and Hilton Head Island, S.C. In lower wind speed areas, damage was mostly limited to trees and tree limbs falling onto homes and other structures.

The damage from storm surge was also limited but there were isolated pockets of significant storm surge heights and resulting property losses, KCC reported. For the most part, Matthew tracked parallel to the coast and in general, this type of track will result in less storm surge than a track that moves perpendicular to the coast after landfall. That being said, because Matthew tracked parallel to the coastline for quite some distance, many areas experienced minor storm surge damage. The most impacted area was Charleston, S.C. because of its  unique position within a small inlet and at the mouth of three rivers, the report said.

As Matthew weakened to a Category 1 hurricane off the coast of South Carolina and then became post tropical, it produced record rainfall amounts which caused rivers and streams to swell and overtop their banks. “Ironically, many residents who had been evacuated from coastal areas found themselves stranded by the rising waters in towns far inland from the coast,” the report added.

As well, water levels are expected to exceed 500-year flood levels for the second time in 20 years in North Carolina.