The impact of the wildfires in the Fort McMurray, Alberta area on oil production could “translate into” a $985-million loss in gross domestic product, though the rebuilding effort will result in “elevated” construction activity in the area through 2018, the Conference Board of Canada suggested in a report announced Tuesday. 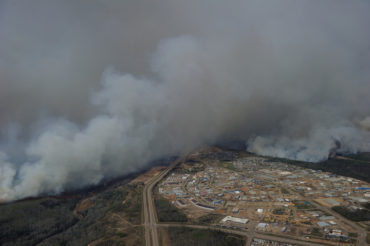 Aerial view of the wildfires in the Fort McMurray, Alberta area from a Canadian Forces CH-146 Griffon helicopter, on May 4, 2016. Photo by MCpl VanPutten. Photo: MCpl VanPutten, 3 CSDB Imaging

The Alberta government said Monday the wildfire “remains out of control” and is estimated to cover 284,214 hectares. A total of 15 wildfires are burning, with three out of control, the province added.

“Oil sands production will be lost for some weeks, but how large an effect will depend on the length of the shutdown” the Conference Board of Canada said in the report, titled Economic Repercussions of Fort Mac Fires-More Complex Than at First Glance. “The Conference Board assumes that most facilities will be up and running by mid-to-late May and that lost oil production will average about 1.2 million barrels per day for 14 days.”

This lost production “would translate into roughly $985 million in lost real GDP-or 0.33 per cent out of Alberta’s GDP in 2016 and only 0.06 per cent out of Canada’s GDP,” the Conference board added in the report, written by Pedro Antunes, executive director, economic outlook and analysis and Marie-Christine Bernard, associate director, provincial forecast.

GDP measures economic activity that generates income through wages, profits or use of capital, the Conference Board authors, adding that GDP does not directly measure losses in wealth or assets such as homes and vehicles.

AIR is projecting insured losses of $4.4 to $9 billion from the wildfires, which began May 1.

“The range in AIR’s loss estimates reflects uncertainty in the payment of additional living expenses resulting from mandatory evacuation of the city’s population, loss of some individual structures outside of the most affected neighborhoods, as well as widespread but lower levels of loss due to smoke, loss of electricity, and damage from suppression efforts,” AIR said Monday.

AIR said Monday its loss estimates are based on an assumption of a “nearly 100%” insurance takeup rate in Alberta and are based on AIR’s Industry Exposure Database (IED) for Canada, damage ratios estimated from satellite imagery and experience U.S. wildfires. Those estimates do not include losses to the energy or timber industries, indirect business interruption, loss adjustment expenses or demand surge. They do include insured physical damage to property (including structures, contents and auto) and direct business interruption losses but not for the oil industry.

“Some producers have already started ramping production back up, and we’ve assumed that most will be up and running by the end of the month,” Antunes and Bernard wrote in the Conference Board report released Tuesday.  “Estimates suggest that temporary shutdowns reduced oil sands production by more than 1 million barrels per day – some of it crude bitumen, but most of it pricier upgraded or synthetic crude oil.”

The provincial government said Monday that Highway 63 “is open to through traffic only to allow employees and supplies of oil sands operations to return and resume production” but there “is no public access” to Fort McMurray.

“This is not a call for workers or residents to return to the Fort McMurray area,” the province stated. “Travel into Fort McMurray is still restricted to emergency response and essential services only.”

Columns of smoke continue to rise up from the myriad of fires in Alberta, Canada. Details: https://t.co/Rb1R8RTAsi pic.twitter.com/ob5iOBlIc4

The Conference Board estimates the rebuilding effort will add “roughly $1.3 billion in real GDP to Alberta’s economy in 2017.

“Construction activity in Fort McMurray will likely return to its peak year levels as residential and other infrastructure is rebuilt,” the Conference Board stated. “Early estimates suggest that in Fort McMurray, 2,400 buildings were damaged or destroyed, including 1,600 private dwellings that were completely destroyed. Most of Fort McMurray’s public buildings were saved from the fire but the city will require additional sums to repair and rebuild roads and other infrastructure. Construction will likely remain elevated in 2018 and perhaps 2019 as rebuilding is completed.”

Efforts by claims adjusters “will help bolster real economic activity” in Alberta,” Antunes and Bernard wrote. “Insurers have opened field offices in Edmonton and surrounding areas and have been issuing cheques and encouraging Fort McMurray evacuees to keep receipts.”

Notley says estimates on drop in GDP and then bump in GDP from Conf. Board of Can are similar to what she's seen. #ymmfire

A massive line of Dozers and excavators prepare to build a fire guard around the Enbridge Tank Farm in Fort McMurray pic.twitter.com/8Pfi1wxZoq

Morrison: Oilsands sites are cleared of vegetation, have own firefighting service. "They are very resistant to wildfire." #ymm #ymmfire

This is what the Blacksand camp looked like before burning down #FortMacFire #ymmfire pic.twitter.com/Ps9Ky4PQKq

Taken from my buddy's FB timeline, this is the Black Sands camp. Praying all are ok. #ymmfire #ymm pic.twitter.com/4eeiino3Gp

When you're turning on city of 90,000, Notley says, "sometimes stuff happens" and that's why re-entry has to be planned and careful #ymmfire