Hurricane risk: What the future holds for Canada

Canada will be increasingly at risk for more frequent and severe hurricanes going forward due to climate change, Swiss Re told Canadian Underwriter in an interview Friday.

“Sea surface temperatures [are] rising, which means storms will be able to travel further north than in the past,” said Dipika Deol, head of P&C treaty underwriting, Canada & English Caribbean and senior vice president at Swiss Re. “The average sea surface temperature, particularly just south of the eastern Canadian provinces… is much warmer than they used to be.

“Simply put, Fiona looks to be one of the strongest transitioning hurricanes ever to impact Atlantic Canada,” Deol said. “The most damaging northeast U.S. as well as Canada hurricanes on record, they involve this kind of setup we’re seeing for Hurricane Fiona.” 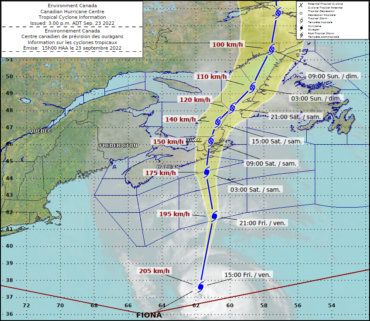 “Most regions will experience hurricane force winds,” EC said in a tropical cyclone statement. “Similar cyclones of this nature have produced structural damage to buildings. Wind impacts will be enhanced by foliage on the trees, potentially causing prolonged and widespread utility outages.”

From a historical context, the last hurricane to hit Canada was Igor in 2010. Adjusted for 2022 dollars (including inflation), Igor, which impacted Newfoundland, would cost US$268 million, Deol said. Hurricane Juan, which made landfall as a Category 2 hurricane near Halifax in 2003, would cause US$223 million in economic damage. Dorian, which made landfall as a post-tropical storm in 2019, would cost US$169 million. “Losses can be quite significant,” Deol said.

When it comes to modelling hurricane risk, Swiss Re is looking more at the current climate than historical conditions. “If we’re looking at the last 25 years, even the last 10 years, they look quite a bit different than the last 100 years, which is what most of these tropical cyclone models that we have available in the industry take [into account].”

For example, Swiss Re now explicitly models “flooding from tropical cyclone-induced rainfall that been calibrated to this forward-looking view of rainfall probabilities and intensities rather than, again, long-term historical average rainfall,” Deol said.

The last few years have seen increased hurricane activity in the Atlantic, and the impacts are looking more severe, she said. “When Hurricane Andrew struck Florida 30 years ago, it was a US$20 billion loss event and that had never occurred before. But just in the past five years, we’ve had four hurricanes with insured losses above that 20 billion-dollar threshold.

“What we’re concerned about is that this could very well become the ‘new normal,’” she said. “Our industry needs to look at hurricanes through a different and somewhat evolved perspective. We believe that the insurance industry at large is underestimating the hurricane risk.”

“And we’ve been seeing this 30% and 60% higher current rates over the past 25 years, which looks very different compared to the long-term average.”

Another consideration is urban sprawl due to demographics.

“Looking at just the last couple of years, what we’ve seen in Canada, we know there’s been a demographic shift where a lot of Canadians have moved to the maritime provinces. It’s worth ensuring that both existing people living in the Maritimes as well as the newer residents stay informed with the government alerts and prepare themselves for hurricanes.”