The United States National Flood Insurance Program – which expires next month – “remains essential and has a purpose,” A.M. Best Company Inc. said in a recent report. 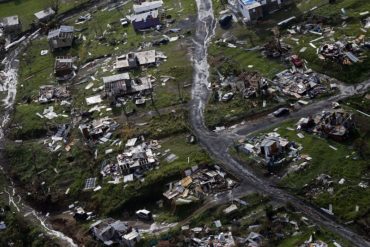 FILE – In this Sept. 28, 2017, file photo, debris scatters a destroyed community in the aftermath of Hurricane Maria in Toa Alta, Puerto Rico. The Senate is pushing ahead on a $36.5 billion hurricane relief package that would give Puerto Rico a much-needed infusion of cash but rejects requests from the powerful Texas and Florida congressional delegations for additional money to rebuild after hurricanes Harvey and Irma. The measure is sure to sail through a Monday, Oct. 23, procedural vote and a final vote is expected no later than Tuesday. (AP Photo/Gerald Herbert, File)

But without billions in relief provided in a law passed Oct. 26, “projected losses” from three recent North Atlantic hurricanes “would have fully exhausted NFIP’s remaining cash reserves, along with its $30.4 billion in borrowing authority from the U.S. Treasury, leaving it unable to pay claims,” A.M. Best noted in a special report released Nov. 3, “Disaster Relief Package Provides Temporary Help for the NFIP; Will Private Insurance Be Part of a Long-Term Fix?”

NFIP was created in 1968. In order to qualify for flood insurance under NFIP, a property must be in a community that has joined the NFIP and agrees to enforce sound floodplain management standards. In some cases, NFIP premiums are subsidized.

A.M. Best reported that in October, there were about 4.93 million NFIP policies in force, of which about 263,000 were non-residential while more than three million were single-family homes.

In 2016, Standard & Poor’s noted that NFIP’s total losses since 2000 were US$42 billion, of which US$16.3 billion was attributed to Hurricane Katrina.

“Up until 2005, the NFIP program was self-sufficient, as revenues collected through flood premiums were enough to keep the program afloat,” A.M. Best said in its special report released Nov, 3, 2017. “It was not until Hurricane Katrina struck that the program got the attention of lawmakers, as flood losses from this event reached record levels.”

Hurricane Katrina, which caused major flooding in New Orleans in late August, 2005, was the costliest insured disaster between 1970 and 2016, Swiss Re said in a sigma report, Natural Disasters and Man-Made Catastrophes in 2016, released in early 2017. In that report, Swiss Re included two lists of 40 man-made and natural disasters, one ranked by number of victims and the other ranked by insured losses to the industry, indexed to inflation to 2016 U.S. dollars. Katrina cost the industry $80.7 billion, with Hurricane Sandy placing third (after the March, 2011 earthquake off the coast of Japan) at $30.1 billion. Hurricane Andrew, the Sept. 11, 2001 attacks, the 1994 Northridge earthquake and Hurricane Ike placed fourth, fifth, sixth and seventh respectively.

Hurricane Sandy was downgraded to post tropical storm status when it made landfall in late October, 2012 about 200 kilometres south of New York City. In addition to Katrina, Sandy, Andrew and Ike, 12 other North Atlantic hurricanes, plus Tropical Storm Allison (which gave rise to nearly $5 billion in insured losses in 2001), made Swiss Re’s top 40 list. Swiss Re said Sandy had $30.1 billion in losses, adjusted for inflation to 2016 American dollars.

Storm Sandy “only added” to NFIP’s deficit “and questions about its viability,” A.M. Best said in its special report released Nov. 3, 2017.

NFIP was set to expire in September. With the passage Sept. 8 of the Continuing Appropriations Act, 2018 and Supplemental Appropriations for Disaster Relief Requirements Act, NFIP was extended to Dec. 8.

A group of insurers and reinsurers, SmarterSafer, has been urging the U.S. congress to “pass a long-term reauthorization bill with crucial reforms to the NFIP,” including allowing private sector competition, “requiring updated property level mapping, investing in mitigation, and moving toward risk based rates coupled with mitigation assistance and means-tested assistance for low-income families.”

The Additional Supplemental Appropriations for Disaster Relief Requirements Act, signed into law Oct. 26 by President Donald Trump, cancels US$16 billion in debt that NFIP owes to the federal treasury. That measure keeps NFIP “from running out of money to pay for the anticipated deluge of claims from Hurricanes Harvey, Irma, and Maria,” A.M. Best noted.

But that law “does not include broader changes to the program that would make it more sustainable,” A.M. Best noted. “Congress currently has less than two months to decide whether to reauthorize the NFIP amid the clamor of those vociferously calling for a significant overhaul.”

“The increasing number of flood events and the increased severity of those events over slightly more than a decade have rendered the flood coverage solution centered on a federally subsidized program woefully inadequate,” A.M. Best said.

“A.M. Best believes that the NFIP, created by Congress in 1968, remains essential and has a purpose, but is at a crossroads with regard to whether privatization is a viable option,” the company added.

NFIP was the subject of hearings in early 2016 before the insurance and housing subcommittee of the House Financial Services Committee. At the time, the subcommittee was studying a bill that did not get passed before the federal election in the fall of 2016.

Brady Kelly, executive director of the National Association of Professional Surplus Lines Offices, told the subcommittee at the time that “consumers whose flood risk do not fit within the terms and limits of the NFIP or whose risks are declined by the standard market, will look to our market – surplus lines – for the solution.”

Kelly said at the time that homeowners “may want replacement coverage rather than actual cash value for their property” and may also want coverages such as additional living expenses or business interruption.

“Facilitating increased private sector involvement in the sale of flood insurance will help promote consumer choice and spur competition,” Teresa Miller, Commissioner of the Pennsylvania State Insurance Department, told the subcommittee on behalf of the National Association of Insurance Commissioners.

“Although most market observers see the opportunity for private carriers to provide solutions for those needing flood insurance as a positive, some are leery that insurers will only be interested in cherry-picking the best risks and leaving those properties most likely to flood for the cash-strapped NFIP, resulting in the program’s financial shortfall persisting owing to adverse risk selection,” A.M. Best said in November, 2017 in its special report.