Which insurers were hit hardest by the third-quarter hurricanes?

Which (re)insurers absorbed the bulk of the insured damages when Hurricanes Harvey, Irma and Maria ripped through the Caribbean and continental United States in 2017 Q3? 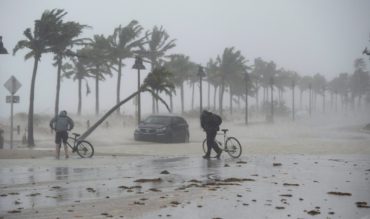 Two guys walk their bicycles along a flooded street on the waterfront of Fort Lauderdale as Hurricane Irma blows in Sunday, September 10, 2017. THE CANADIAN PRESS/Paul Chiasson

A.M. Best compiled a list of 41 insurers and reinsurers who paid out more than $100 million in damage claims arising from the hurricanes (all figures U.S.). For some of the companies on the list, the figures include payouts for the Mexican earthquake in September 2017.

Topping A.M. Best’s list is Lloyd’s of London, which reported taking a $4.8-billion loss as a result of the hurricanes.

Rounding out the Top 5 are:

Fairfax Financial, the eleventh-highest insurer on the list, will be familiar to the Canadian property and casualty insurance industry. Headquartered in Toronto, the company reported paying out $930 million in pre-tax net losses as a result of the U.S. hurricanes.

“Based on initial reported losses, early indications are that total industry losses from the three hurricanes may be upwards of $90 billion,” A.M. Best reported in its Special Report: Third Quarter Catastrophes Will Define 2017. “Primary insurers, traditional reinsurance, collateralized reinsurance, and insurance-linked securities (ILS) will all share the losses of these events.

“Although the third quarter catastrophes have had a profound impact on earnings, they are unlikely to constitute a capital event for the majority of reinsurers, based on current reported losses.”

Based on 2017 being a fairly benign catastrophe year in Canada, Canadian P&C analysts expect some “upward movement” of reinsurance rates in certain regions following the hurricanes.

MSA Research President and CEO Joel Baker told Canadian Underwriter in December that the hurricanes will have an impact on renewals south of the border, although there is still plenty of capacity globally from both the traditional reinsurance market as well as on the insurance-linked securities side.

“We expect that the impact on Canadian risks will be more muted,” he added. “The global stress on the reinsurance industry will likely ensure that rates will not go down in Canada and that there may be some upward movement in certain regions.”