Intact’s assessment of insured damages from Fort McMurray wildfire estimated at $1 to $1.20 per share

Intact Financial Corporation’s (IFC) assessment of its insured damages from the Fort McMurray wildfire using satellite imagery and its exposure geocoding technology ranges from $1 to $1.20 per share, the insurer said on Monday. 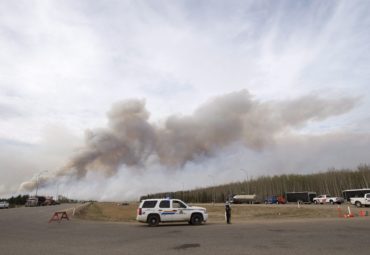 Smoke billows from wildfires as RCMP man a checkpoint on the highway to Fort McMurray, Alberta wildfires that are still burning out of control Saturday, May 7, 2016.THE CANADIAN PRESS/Ryan Remiorz

The assessment range, while early, is “after taking into account the effect of its reinsurance program and net of tax effects,” IFC said in a press release. “This analysis assumes wildfires will not return to Fort McMurray,” said IFC, Canada’s largest provider of property and casualty insurance in Canada with close to $8 billion in premiums.

IFC noted that it has initiated its catastrophe response plan in light of the wildfires in Fort McMurray and surrounding areas, with over 1,000 claims employees already helping affected customers. Intact Insurance, belairdirect and Canadian Direct Insurance are also on the ground at a number of emergency evacuation centres to assist customers.

“The devastation brought on by the wildfires is unprecedented,” said Charles Brindamour, chief executive officer of IFC, in the release. “The scope of the damage and destruction that we have observed in recent days is a reminder of the important role we play in getting our customers back on track.”

“Intact’s dedicated team of adjusters, brokers, contractors, vendors and engineers is ready to help its customers to assess damages and begin to restore their lives,” the release said. “To accelerate the process, Intact has mobilized its community response teams to provide assistance and support to its customers over the phone and in person.”

On Friday, Intact noted in a statement that in light of changing weather patterns over the past few years, it has “adapted [its] reinsurance program to limit the net impact of single or repeated events of such magnitude. Of the first $200 million of insured damage in a single event, we retain $140 million and above that, it is more than 92% reinsured.” The company reported that its “reinsurance program globally has more capacity than our total estimated exposure in the Fort McMurray region.”

IFC subsidiaries insure approximately 1,500 homeowners, 1,400 condos/tenants, and 350 commercial buildings in Fort McMurray. That said, “it is too early to estimate precisely the total damages that this catastrophe will ultimately cause,” the statement said.

Analysts at Deutsche Bank Markets Research said that in a post on Friday on Artemis’ website that they “expect the loss from the fires will quickly eat into the reinsurance layers, potentially affecting also [insurance-linked securities] and alternative capital.” Deutsche Bank analysts note that the loss so far seems to be largely restricted to retail and commercial properties, but “should any of the oil infrastructure come under threat, the commercial losses could rise dramatically.” As well, there is a “chance of some business interruption claims filtering through to add to the insured loss total, as so many of the oil facilities have been evacuated or had their pipelines shut down as a safety precaution.”

Deutsche Bank expects the wildfires to be a “reinsurance vent, more than a primary insurance event. “The reasoning behind this is that of the three largest primary insurers in the local area, Intact with roughly a 16% market share, Aviva with 8% and RSA at 7%, their direct exposure to this event is limited to around US$170m due to their reinsurance provisions taking losses above that level.” [click image below to enlarge] 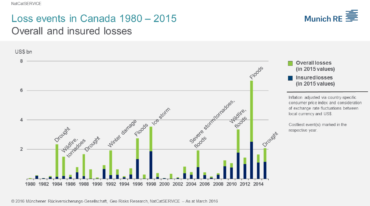 Of the global reinsurance firms, the analysts say that Munich Re would likely be most exposed with around 20% market share on a premiums written basis, with Swiss Re next at 17%, followed by Hannover Re and SCOR. However, the latter two reinsurers will likely be less affected due to their use of retrocessional protection, according to Deutsche Bank.

Peter Höppe, Munich Re’s head of Geo Risk Research, said that “for the time being and as the event is still ongoing, it is too early for an assessment of the losses.” Höppe did note, however, that “Canada is a country with the third largest forest area in the world” and that the “likelihood of wildfire is much greater in northern Canada than in the south.” The current wildfires in Alberta have reached an “outstanding dimension” in terms of the area affected and their destructive power, he noted.

As well, the region has gone through an extreme warm period in the last months with average temperatures for January to March in some places more than 3°C higher than on long term average, but Höppe said that there is “no indication that the current situation has been affected by the still active El Niño phase as in previous years, with strong El Niños neither the frequency nor the losses have been unusual.” He even predicted that as “global warming increases the fire hazard in many regions in Canada, [it] will result in a longer fire season.”