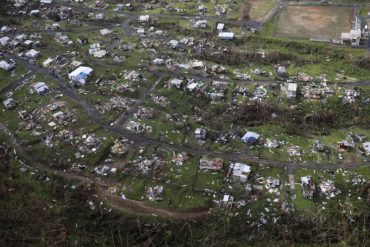 Destroyed communities are seen in the aftermath of Hurricane Maria in Toa Alta, Puerto Rico, Thursday, Sept. 28, 2017. The aftermath of the powerful storm has resulted in a near-total shutdown of the U.S. territory’s economy that could last for weeks and has many people running seriously low on cash and worrying that it will become even harder to survive on this storm-ravaged island. (AP Photo/Gerald Herbert)

The majority of losses – US$28.35 billion – will be from Puerto Rico, KCC said in the flash estimate, released on Thursday. Insured losses are estimated at US$789 million for the U.S. Virgin Islands, US$445 million for Dominica, US$119 million for Guadeloupe and US$94 million for other territories (which includes the British Virgin Islands, Dominican Republic, Martinique, Saint Kitts and Nevis, and Turks and Caicos).

According to KCC’s estimate, Maria was the strongest hurricane to make landfall in Puerto Rico since the San Felipe II Hurricane in 1928 and the first major hurricane since Hurricane Hugo in 1989. Maria also strengthened from a Category 1 to a Category 5 hurricane in 15 hours, second only to Hurricane Wilma’s (2005) record of 12 hours.

KCC reported that Maria was similar to San Felipe II, which passed over Guadeloupe just north of Dominica with Category 4 wind speeds and intensified to Category 5 “as it followed a similar track south of the U.S. Virgin Islands.”

Unlike Hurricane Maria, which weakened slightly on the final approach to Puerto Rico, the San Felipe II hurricane maintained intensity as a Category 5 storm and made landfall near Guayama, with wind speeds close to 160 miles per hour. The landfall point is slightly south of Maria’s, but the storm made a similar southeast to northwest path across Puerto. “For the most part, the decay for both hurricanes was very similar as they crossed Puerto Rico, although the disparity in the initial wind speeds meant that the San Felipe II hurricane was consistently stronger than Maria,” the estimate said.

KCC estimates that a repeat of San Felipe II would cause insured in Puerto Rico similar to the losses caused by Hurricane Maria.

Maria tracked east of the Bahamas after impacting Puerto Rico and veered out to sea, while San Felipe II crossed the Bahamas and made landfall near Palm Beach as a Category 4 hurricane, causing additional extensive damage in Florida.

On Thursday, global risk modelling and analytics firm RMS estimated that the insured losses from Maria would be between US$15-30 billion. The estimate represented the insured losses associated with wind, storm surge and inland flood damage across the Caribbean, with Puerto Rico and Dominica suffering the most widespread destruction, according to RMS.