The impact on Italian insurers from the earthquake that struck the central part of the country is likely to be limited, ratings firm Fitch Ratings said on Friday. 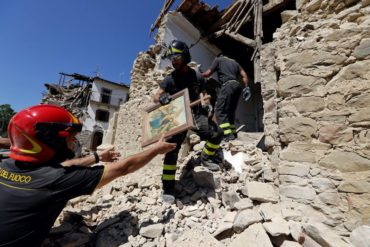 Firefighters retrieve a painting from a church in the small town of Rio, near Amatrice, central Italy, Sunday, Aug. 28, 2016. Bulldozers with huge claws pulled down dangerously overhanging ledges Sunday in Italy’s quake-devastated town of Amatrice as investigators worked to figure out if negligence or fraud in building codes had added to the quake’s high death toll. (AP Photo/Andrew Medichini)

The estimate reflects the “low density of population and businesses and limited insurance coverage in the region.” Claims of this magnitude would not have a material impact on Italian insurers’ underwriting results or credit profiles, the statement said, noting that Italian non-life insurers wrote 2.3 billion euros of gross written premiums of property insurance in 2015.

Italy has declared a state of emergency in the region hit by the earthquake and the government has pledged 50 million euros for first aid. The declaration of a state of emergency means that certain losses will be covered by a state fund for emergencies, limiting losses for insurers.

150 families are living inside this #Amatrice gym. An outpouring of donations, blankets & clothes fill the rafters pic.twitter.com/vKQCb5fToQ

Aon Benfield’s Impact Forecasting said last week that the region of Italy hit by the earthquake has building with “inadequate supporting iron rods” and a “relatively low” penetration of earthquake insurance for residential property. “It remains too early to provide a specific economic or insured loss estimate at this time,” Impact Forecasting said in a cat alert at the time.

The United States Geological Survey has preliminarily estimated that there is a 62% probability that economic damage will exceed US$1 billion, Impact Forecasting stated.

What remains of the #Amatrice school. It was made "earthquake proof" in 2012 at a cost of nearly $1 million pic.twitter.com/WRm0ptAL48