The magnitude of the fire that engulfed London’s Grenfell Tower in June was preventable, according to a newly released whitepaper from FM Global, one of the world’s largest business property insurers. 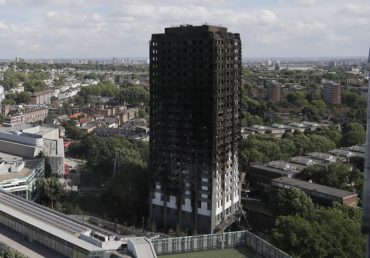 The scorched facade of the Grenfell Tower in London, Thursday, June 15, 2017, after a massive fire raced through the 24-storey high-rise apartment building in west London early Wednesday. Firefighters are beginning the task of combing through the devastated apartment tower, Thursday, checking integrity of the structure and searching to find victims.(AP Photo/Frank Augstein)

On June 14, a massive fire broke out in the 24-storey Grenfell Tower, located in West London, United Kingdom, claiming the lives of about 80 people, said the whitepaper, titled Grenfell: The Perfect Formula for Tragedy. (On Sept. 19, the Associated Press quoted London’s Metropolitan Police Commander Stuart Cundy as saying that the final figure might “come down a little” and so far 60 victims have been formally identified. The police force also reported that “individuals may face manslaughter charges over the blaze.”)

A press release from FM Global said that if automatic fire sprinklers were installed in the building, the fire likely would have been controlled in the room where it started. That could have prevented the highly combustible exterior from igniting.

“The heights of new buildings are quickly rising worldwide and so has the fire risk,” said Chris Johnson, FM Global’s executive vice president. “Automatic fire sprinkler protection combined with less combustible building materials must be enforced for new building designs. Regardless of how efficient or resourceful the local fire service is, there’s a need for regulatory change.”

Although the 1974 concrete building was renovated in 2016 and retrofitted with aluminum composite panel rainscreen cladding to improve energy efficiency and visual appearance, the whitepaper said, the renovation did not include the addition of sprinklers. With no automatic fire sprinklers to control the internal fire, the fire spread and reached external openings. Once ignited, the highly combustible new building cladding allowed the fire to spread rapidly up and along, and ultimately through, the entire building. “Had automatic sprinklers been installed, the fire would have likely been controlled to the room of origin, and the world would never have heard of Grenfell Tower,” the report said.

The cause of the fire was reported to be a refrigerator in a fourth-floor unit.

The whitepaper also examined how similar fires in other areas of the world provide loss lessons for the future. In particular, the report looked at the Torch Tower fire in Dubai, UAE and the Marco Polo Apartments fire in Honolulu, Hawaii.

The Dubai fire on Aug. 3 was the second fire in 2½ years in the 86-storey tower, originating on the 26th floor and spreading to the top of the building. The Torch Tower had a highly combustible exterior, but automatic fire sprinklers, the whitepaper noted. A reported 38 units and 64 exterior floors were damaged. The cause of the fire was said to be cigarette butts discarded into a potted plant.

“The two Torch Tower fires in Dubai demonstrated that the use of highly combustible exterior materials leads to rapid fire spread and propagation along the building; however, the sue of automatic fire sprinklers prevented the fires from propagating internally, minimizing damage within the units and preventing fatalities,” the report said.

In the Marco Polo Apartment fire, a blaze began on the 26th floor of the 36-storey building and, due to the lack of automatic fire sprinklers, propagated from the room of origin, spreading internally and to the exterior of the building. The noncombustible concrete exterior construction limited the external fire propagation to the 28th floor.

FM Global is a mutual insurance company established nearly two centuries ago. The company’s capital, scientific research capability and engineering expertise are solely dedicated to property risk management and the resilience of its client-owners.