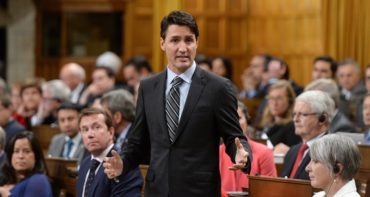 The provinces will be able to either impose their own direct price on carbon that meets or exceeds the national floor price or set up a cap and trade system. Photo: @BNN.

Trudeau revealed Monday his plan to reduce greenhouse gas emissions, starting in 2018 with a low carbon price of $10 per tonne that would rise by $10 per tonne each year until it reaches $50 per tonne in 2022.

And he gave the provinces just two options for implementing that price: either impose their own direct price on carbon that meets or exceeds the national floor price, as British Columbia has already done, or set up a cap and trade system, such as Ontario and Quebec are developing.

“There is no hiding from climate change,” he told the Commons. “It is real and it is everywhere.”

“We cannot undo the last 10 years of inaction. What we can do is make a real and honest effort – today and every day – to protect the health of our environment, and with it, the health of all Canadians.”

The prime minister made the announcement as he kicked off a debate in the House of Commons over whether Canada should ratify the Paris accord on climate change. It came as provincial environment ministers were meeting in Montreal with federal counterpart Catherine McKenna to hash out an agreement over carbon pricing.

“The air was sucked out of the room,” Yukon’s Currie Dixon said of Trudeau’s announcement, calling it an odd way to build collaborative policy.

And Scott Moe, Saskatchewan’s minister, said, “Many westerners will see this as ‘national energy program 2.0.’”

All three northern territories and Saskatchewan are opposed to carbon pricing.

While Alberta’s NDP government supports a common price on carbon across the country, Premier Rachel Notley served notice that she’ll oppose the federal plan until she sees “serious concurrent progress” on the pipelines that her province needs to get its oil sands crude to tidewater.

“Albertans have contributed very generously for many years to national initiatives to help other regions address economic challenges,” Notley said in a written statement.

“What we are asking for now is that our landlock be broken, in one direction or another, so that we can get back on our feet.”

Quebec’s David Heurtel, the chairman of the meeting, and Ontario’s Glen Murray both welcomed the new federal policy, saying it fully recognizes their provincial jurisdiction.

Trudeau argued that pricing carbon pollution will give Canada a “significant advantage” in building a cleaner economy, compel businesses to innovate to find ways to reduce their emissions and create potentially hundreds of thousands of “new and exciting” clean tech jobs.

Conservative environment critic Ed Fast accused Trudeau of taking a “sledgehammer” to the provinces after having promised to usher in a new era of federal-provincial collaboration.

NDP environment critic Linda Duncan and Green Party leader Elizabeth May said the plan falls short of what needs to be done, criticizing Trudeau for adopting the previous Harper government’s targets for reducing emissions which the Liberals used to call weak and inadequate.

“We have the Conservative party thinking we go too far, we have the NDP thinking we’re not going far enough,” Trudeau observed.

“I think – like most Canadians will think – that we have got the right balance.”