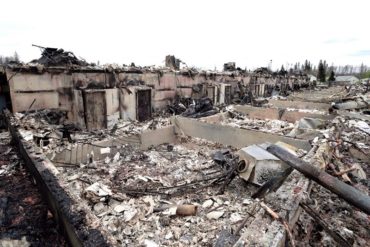 Burned-out houses are shown in the Abasands neighbourhood during a media tour of the fire-damaged city of Fort McMurray, Alta., in a May 9, 2016, file photo. The Canadian Red Cross says $299 million has been raised to help with recovery from the Fort McMurray wildfire. THE CANADIAN PRESS/Jonathan Hayward, File

The wildfire in May was the most expensive natural catastrophe in Canadian history, when measured by insured losses. It resulted in the evacuation of about 88,000 people – including the entire city of Fort McMurray – on May 3, PCS noted.

PCS’s latest estimate of property insurance losses is about 31% higher than the $3.58 billion estimate released July 7  by Catastrophe Indices and Quantification Inc. and Insurance Bureau of Canada.

CatIQ, a sister company to Toronto-based MSA Research Inc., works with insurers to aggregate industry losses, CatIQ managing director Carolyn Rennie said in July. When measured by direct premiums written, about 80% of the market participates with CatIQ, Rennie said during a press conference, adding that CatIQ grosses its estimate up to 100% of the industry.

PCS’s latest bulletin is a re-survey of an estimate of insured property damage from the wildfire. The average claim from the Alberta wildfire was $120,159, PCS added.

PCS defines a catastrophe as one that causes US$25 million or more “in direct insured losses to property and affect a significant number of policyholders and insurers.” Jersey City, N.J.-based PCS collects data on disasters in the U.S. and Canada. Its figures represent anticipated insured loss on an industry wide basis and reflects its judgment “of the total insured payment for personal and commercial property lines of insurance covering fixed property, personal property, time element losses, vehicles, boats and related property items.

Before the Fort McMurray disaster, Canada’s most expensive natural catastrophe, by insured losses, had been the flooding in 2013  in southern Alberta, said Bill Adams, IBC’s vice president western and Pacific, during IBC’s July 7 news conference. Total economic losses from the 2013 floods were about $6 billion but insured losses were only about $1.7 billion because overland flood for residential properties was generally unavailable in Canada at the time. Most of the $1.7 billion in insured losses from the 2013 floods was from sewer backup coverage, Adams said in July.

Before 2013, Canada’s most expensive natural disaster had been the ice storm in 1998 affecting eastern Ontario and Quebec, Property and Casualty Insurance Compensation Corp. reported earlier.

Statistics Canada reported that between Jan. 4 and 10, 1998, the total water equivalent of precipitation was more than 100 mm in some areas south of Montreal. The 1998 ice storm brought down about 1,000 power transmission towers, leaving about 1.4 million customers in Quebec and more than 230,000 customers in Ontario without electricity, according to Statistics Canada.

As of 2012, PACICC reported that the natural catastrophes ranking second and third – by insured losses – were the 2011 wildfire in Slave Lake, Alta. and a 2005 thunderstorm in Toronto, which washed out the Finch Avenue bridge crossing Black Creek.

Then in 2013, the floods in southern Alberta and a July 8 thunderstorm in Toronto took first and third place respectively.

While much of the 2013 Alberta flood losses were uninsured, the “vast majority of the ultimate costs” of the Fort McMurray wildfire “will be borne by insurance policies of one variety or another,” Adams said July 7.

In its re-survey of the Fort McMurray catastrophe, PCS noted in August that the 2016 Alberta wildfire caused the largest evacuation in the history of Alberta.

The largest peacetime evacuation in Canadian history – of more than 200,000 people – happened in November, 1979, published reports suggest. Shortly before midnight Nov. 10, 1979, a Canadian Pacific Railway train derailed near Highway 5 and Mavis Road in Mississauga, about 30 kilometres west of downtown Toronto. The train was hauling chlorine, propane, toluene, caustic soda and styrene from Chatham, wrote Mr. Justice Samuel Grange, then of the Supreme Court of Ontario, who presided over a federal inquiry into the accident.

Four propane tanker cars exploded while a fifth, containing chlorine, “suffered a hole in its shell 2.5 feet in diameter,” Justice Grange wrote in the report on the inquiry. The evacuation area included a “large portion of Mississauga, together with a small part of Oakville to the west and isolated pockets of Etobicoke… to the east,” added Justice Grange. “Miraculously no casualties were suffered.”