With the recent wildfire in Fort McMurray, Alta. being the most expensive natural disaster in Canadian history and in the same province as Canada’s second most expensive catastrophe, officials from Insurance Bureau of Canada recently suggested that building codes and zoning laws may need to change to reduce property risk. 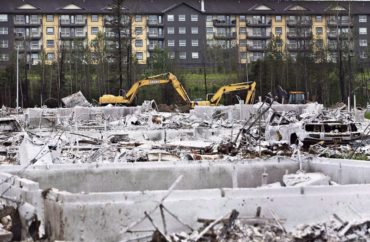 Crews work to clean up the wildfire destruction in Fort McMurray Alta., on June 24, 2016. The Alberta government says it will post online the resumes of companies that want to rebuild homes destroyed or damaged by the Fort McMurray wildfires in a move to help residents make informed choices.THE CANADIAN PRESS/Jason Franson

“There is no question that Alberta has seen a disproportionate number of significant events over the course of the last number of years,” Bill Adams, vice president western and Pacific for IBC, said July 7 during a press conference.

“I will leave it to the meteorologists and climatologists and others who have a much better appreciation and understanding of all the dynamics that lead to that, but ultimately what we are seeing is that our climate is changing and the long term trends are directly the result of some of those dynamics, so what we are advocating as an industry is that we need to think through an approach that recognizes that the environment in which we are providing coverage for risks is changing and has changed.”

During the July 7 press conference, IBC announced that Catastrophe Indices and Quantification Inc. (CatIQ)’s most recent estimate of insurance damage arising from the wildfire affecting Fort McMurray was $3.58 billion.

CatIQ is a sister company to Toronto-based MSA Research Inc. During its Canadian Catastrophe Conference in Toronto earlier this year, Rennie told attendees that of the six weather events that caused more than $25 million in damage, in 2015, four affected Alberta. The two most expensive events in 2015 ($260 million and $165 million) involved hail damage to the Calgary area.

“Our thinking as a society needs to change to make certain we are reflecting in building codes and as we develop urban and rural municipalities, we are doing so in a prudent way, and keeping people out of harm’s way,” Adams said July 7 during the press conference on the Fort McMurray wildfire. “Historically, we have not done that well in Canada and perhaps less so in Alberta and unfortunately, we are living with the consequences now. But we have a number of proposals that would reframe the risk profile … and begin to reverse the trend of these significantly damaging events and the impact on Albertans.”

Before the Fort McMurray wildfire, Canada’s most expensive natural catastrophe, by insured losses, had been the 2013 flood affecting southern Alberta. Of total economic losses of about $6 billion, Adams noted the insured loss was about $1.7 billion (mainly from sewer backup) while overland flood for residential properties was generally unavailable in Canada at the time. The southern Alberta floods happened less than a month before the third most expensive disaster, which arose July 8 when the Toronto area got more rain in about 90 minutes than it normally gets in the entire month of July.

“Those were two events that really caused Canada’s insurance industry to pause and take stock of whether in fact the current way in which we deal with water damage was the best that we could do as an industry,” Adams said. “We have spent the last two and a half or three years literally exploring different programs for the way in which other G7 countries deal with water related losses and we have come up with what we think is a fairly good proposal that we have engaged the province and the federal government on, around redefining how you distribute the risks associated with water.”

While Britain’s Flood Re was launched in April and the United States has had its National Flood Insurance Program since 1968, IBC CEO Don Forgeron said in 2015, at the National Insurance conference of Canada, that there is “no flood insurance model elsewhere in the world that can serve as an off-the shelf solution for us here in Canada.”

Forgeron made those comments Oct. 2 during a panel comprised of officials from the German Insurance Association and Flood Re.

Though several Canadian insurers have launched overland flood coverage over the past year, Forgeron said in 2015 that those will “likely not deal with all of the high-risk properties” and therefore the industry needs government involvement.

“We are advocating for a public-private partnership that would see more of the water risks in Canada taken on by the private sector, but for government to formalize its role in providing both support to get people out of harm’s way – to prevent them from building in floodplains – and to ensure those who are at highest risk would also continue to have some type of insurance coverage,” Adams said July 7. “We think we have gone beyond the time where we should allow these events to take place and for us as an industry and governments to move in and try and help people recover. We need to reverse that trend and we need to put more resilience in at the front and prevent the impact of these events.”