OTTAWA – As the devastating floodwaters recede in Ontario and Quebec, the key to preventing a similar disaster in future is to avoid making the mistakes that led to problems in the first place, says Public Safety Minister Ralph Goodale. 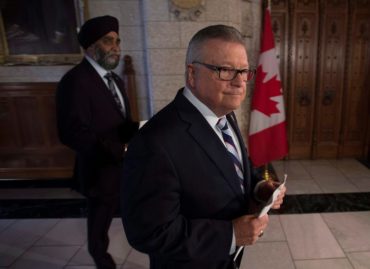 Defence Minister Harjit Sajjan, left, and Public Safety and Emergency Preparedness Minister Ralph Goodale make their way to speak with the media about the federal governments flood relief effort before question period on Parliament Hill in Ottawa on Wednesday, May 10, 2017. THE CANADIAN PRESS/Adrian Wyld

The philosophy of “build back better” will be on the agenda when Goodale next meets his provincial and territorial counterparts, to better ensure cities are protected from what he says is a very real peril in climate change.

“I think there will be an appetite to actually grasp this, because the pace at which these issues are arising is clearly accelerating – one of the consequences we believe of the phenomenon of climate change,” Goodale said.

He pointed to flooding in Ontario, Quebec, Saskatchewan, Manitoba and Alberta in the last four years, as well as ice storms in New Brunswick and last year’s wildfire in Fort McMurray.

“There’s a pattern here and it behooves us all to take this seriously.”

Getting better information is a key to building safer cities, he added.

Officials are working on updates to national floodplain maps to help local officials make better decisions about where to build. The work comes almost a year after the federal environment commissioner warned that the maps had not been properly updated in 20 years.

The federal government has pledged cash for risk assessments and new infrastructure construction, hoping to nudge cities into making better decisions about what projects they need and how badly they need them done.

As well, this year’s federal budget earmarked $2 billion in infrastructure funding over 11 years, most of it to be spent after 2021, to help disaster-proof communities. A further $281 million over 11 years is set aside to help communities adapt to climate change.

Federal Infrastructure Minister Amarjeet Sohi wants communities to release any maps or data about flooding concerns in their communities in order to help themselves and residents make better decisions about building in flood-prone areas.

Internal government reports show that some municipal leaders have been wary about mapping – and publicizing – flood risks, even going so far as to turn down free mapping tools. Documents obtained by The Canadian Press show the concerns revolve around whether the information, once public, will reduce property values, increase a municipality’s legal liability and lead to a political backlash from voters.

Sohi acknowledged that releasing the information is controversial in some municipalities, but it’s the only way homeowners will be able to decide how to protect their properties.

A spokesman for Sohi later said it is up to individual cities to decide whether to release the information, not the federal government, and doing so won’t be tied to requirements for any government infrastructure programs.

The long timeline for spending could be a problem for municipalities that could use the help sooner, said NDP infrastructure critic Matthew Dube.

“Communities are – and what we’re seeing now is proof of that and what we will continue to see – in desperate need of having those dollars,” Dube said, referring to flooding in Ontario and Quebec.

Conservative MP Tony Clement said the government has to come up with a better policy in regards to flood planning, including how to target infrastructure dollars.