Intact Financial Corporation was holding focus groups on diversity and inclusion a few months ago, when a young manager of colour shared her experience with the insurer’s senior management.

“She gave an example to us, which struck most of the management team,” recalled Louis Marcotte, senior vice president and chief financial officer at Intact Financial Corporation. “She said, ‘Listen, there’s a difference between being invited to the dance and being invited to dance.”

The statement recalls a line from diversity advocate Vernā Myers, who is quoted as saying: “Diversity is being invited to the party. Inclusion is being asked to dance.

“It really struck me, this notion of, ‘Yes, you’re comfortable, we’re friendly people, and we accept everybody,’ but we need to take it a notch higher,” Marcotte said.

He shared his comments on diversity and inclusion during the Canadian Insurance Accountant Association’s CFO panel discussion Nov. 26. The panel, presented by PwC, touched on a number of topics including diversity and inclusion, industry trends, the impact of COVID-19 on the industry, IFRS 17, environmental, social and corporate governance, and cyber. 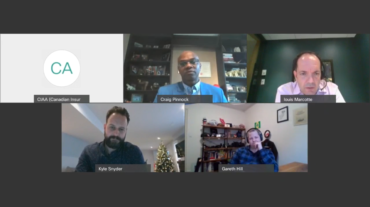 Marcotte said the comment from the young, promising Black manager “really hit me. She explained how she lived it [diversity and inclusion] at Intact. We thought we’re a very accepting company, and we have diversity days, and I thought we did the right things.”

But management realized more needs to be done. Intact is reviewing its values and public comments “and putting the bar a bit higher in terms of what our commitment is,” Marcotte said.

“Systemic racism – I don’t think people understand it fully, and you’ve got to be able to understand what it means to be able to act against it,” Marcotte said, adding that initiatives like the BlackNorth Initiative will hopefully carry weight and change people’s mentality.

“I think we’re in the right direction, but we can’t stop,” Marcotte said. “We just need to keep going on this front. Companies have to take a leadership role. Society expects companies to do better and influence.”

The BlackNorth Initiative, which Intact joined, is led by the Canadian Council of Business Leaders Against Anti-Black Systemic Racism. The goal is to remove anti-Black systemic barriers negatively affecting the lives of Black Canadians, and uses a business-first mindset.

Prem Watsa, CEO of Fairfax Financial Holdings, was one of the founding directors of the BlackNorth Initiative. Craig Pinnock, CFO of Northbridge Financial Corporation, chairs a Fairfax action committee comprised of membership from six other companies covering Canada, the United States, and the United Kingdom (Fairfax is Northbridge’s parent company).

Related: The case for using data for diversity and inclusion in senior ranks

Pinnock said during the webinar that Watsa met with Black people in each of his seven largest insurance companies across the world and assembled some takeaways based on his discussions. The action committee provided a series of recommendations to Watsa, who in turn shared them with the CEOs of the seven companies for them to work on within a specified timeline.

“Things along the lines of those deliverables were: adding language to public documents and townhalls and the like, which stated plainly racism will not be tolerated,” Pinnock said. Other ideas included partnering with charity groups focused on addressing systemic racism, and looking at recruitment techniques.

To create a diverse workforce, “you really need a pool from which to select that is more diverse,” Pinnock stressed. “And that in no way, shape, or form should be seen as a cop-out: I do not believe you can use that as your only lever, but it is an important lever. So, what can you do differently – working with programs, universities, and charities – to help build out that pool through programs that are targeted at assisting those who are not as privileged?”

Rowena Chan, president of Sun Life Financial Distributors (Canada) Inc., and senior vice president of distribution, agreed there needs to be a deliberate inclusion effort – particularly within the Black and Indigenous communities.

“We need to plot that journey very early, even before campus recruiting,” she said last month at KPMG’s 2020 Insurance Conference webinar. “It’s a long-term commitment to bring full diversity into the mix.”