A collision between two trains Sunday, about 2 kilometres northwest of the Ontario legislature building, on a freight track serving as a “major link” between Western Canada and the Port of Montreal, is under investigation. 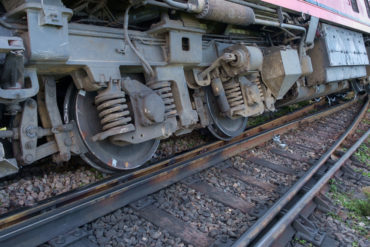 The Transportation Safety Board of Canada announced Sunday it is sending an investigator to Toronto “following the collision between a set of Canadian Pacific Railway locomotives and an intermodal train.”

The derailment occurred near Dupont Street and Spadina Road at about 5:45 a.m. Aug. 21, Toronto Police Services stated in a tweet, adding there were “no reports of injury or public safety threat.” The site is situated south of the George Brown College Casa Loma Campus and north of the Annex neighbourhood. The same section of track bisects the upscale community of Rosedale.

Published reports indicate there was a diesel fuel spill from one of the trains.

That section of track – the North Toronto Subdivision – is Canadian Pacific Railway’s “sole freight-only route through the City of Toronto connecting to Central Canada, western Canada” and the United States, consulting firm Hatch Mott MacDonald stated in a report released in 2014 for the City of Toronto.

That 5.9-mile segment is “part of a major link between the Port of Montreal, Central Canada, Western Canada, and the U.S.” The subdivision runs, west to east, from the “Toronto Diamond” – a rail junction about eight kilometres northwest of the financial district – to a rail yard south of the community of Leaside. Part of the North Toronto Subdivision runs east and west parallel to and north of Dupont St.

“Any commodity legally transported in Canada (including dangerous goods), in an approved container, can be moved on this line at any time,” Hatch Mott MacDonald said in the report, titled City of Toronto North Toronto Subdivision Rail Corridor Risk Assessment and Management Study.

Canadian Pacific operated passenger service along that subdivision until 1978, according to the report.

One purpose of the report – which focuses on risks to people and property along Dupont St. from Ossington Ave. to Kendal Ave. – was to provide information for city staff to develop the Dupont Street Regeneration Area Study.

About 35 to 40 Canadian Pacific freight trains per day go through that subdivision, Hatch Mott MacDonald added in the report.

Based on a site visit in 2014 “the rolling stock on the corridor consists of a mix of freight, including intermodal containers and trailers, tank cars, bi-level and tri-level cars, and grain cars,” Hatch Mott MacDonald stated in the report.

“Commodities are likely to include grain, chemicals (including various dangerous goods), agriculture and food products, automotive products, mine products and forest products.”

The speed limit on that part of the track is 50 miles per hour for expedited shipments, 45 mph for non-expedited, 35 for dangerous goods and 24 mph for special dangerous goods, Hatch Mott MacDonald noted in the report. The study area for that report is for Mile 3.09 through Mile 4.23 of the North Toronto subdivision, or from Ossington Ave. to Spadina Rd. (immediately east of Kendal Ave.)

In 2015, 1,200 rail accidents were reported to TSB, the investigations agency said in its annual report to Parliament released in July. TSB is a separate organization from Transport Canada that investigates rail, aviation, marine and pipeline incidents. Of the 1,200 accidents reported in 2015, 144 involved dangerous goods and six resulted in a dangerous goods release, TSB said in July. There were 46 rail fatalities in 2015, of which 15 arose from crossings and 30 were trespassers. One railway employee was fatally injured, TSB added.

TSB issued five rail recommendations in 2015, all of which came from its investigation into a September, 2013 accident in Ottawa when a city transit bus collided with a VIA passenger train at a level crossing, killing the bus driver and five bus passengers.

From 1990 through 2016, TSB made 566 recommendations, of which 144 were in rail. Although 24 recommendations issued in aviation were considered by TSB as having an unsatisfactory response, none of the rail recommendations fall into that category.

One recommendation which TSB assessed as having a “satisfactory in part” response was issued in 2014 as a result of the Lac-Mégantic, Quebec tragedy. TSB recommended that Transport Canada “set stringent criteria for the operation of trains carrying dangerous goods, and require railway companies to conduct route planning and analysis as well as perform periodic risk assessments to ensure that risk control measures work.”

In April, 2014, Transport Canada issued a “protective direction” requiring rail operators have an ERAP “for the offering for transport or import of certain higher-risk hydrocarbons and flammable liquids, such as petroleum distillates, crude oil, gasoline, diesel, aviation fuel and ethanol, when offered for transport or imported by rail in one or more tank cars that are each filled to 10% of capacity or more.”

On July 5, 2013, a Montreal, Maine and Atlantic (MMA) Railway train hauling 72 tanker cars with crude oil was stopped for the night near Nantes, about 180 kilometres south of Quebec City. The lone crew member was resting at the time. At about 1:00 a.m. on July 6, the unattended train started to move downhill, picked up speed and 63 tanker cars derailed in Lac-Mégantic. TSB reported that 47 people were killed, six million litres of crude oil spilled and 40 buildings were destroyed.

Transport Canada “immediately prohibited the use of some older Class 111 tanks cars,” TSB noted, adding the federal government “will also require that all pre-CPC-1232/TP14877 tank cars used for the transportation of crude oil and ethanol be phased out of service or retrofitted within 3 years.”

There will be a gradual phase out of Class 111 cars, TSB noted, while the new TC-117 tank car standard “requires all new tank cars built for the transport of flammable liquids to be constructed using thicker and more impact-resistant steel and to be equipped with jacketed thermal protection, full-height head shields, top fittings protection, improved bottom outlet valves and appropriate pressure relief devices.”

However, “some Class 111 cars, including jacketed CPC-1232 cars, can remain in selected flammable liquid service until 2025,” TSB added.