Schools were closed and travel hampered in much of Atlantic Canada on Friday due to a fast-moving and powerful winter storm that blew in from the United States on Thursday night. 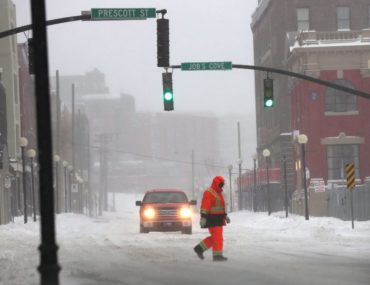 A man walks across Water Street in downtown St. John’s on Tuesday, Feb. 9, 2016. The powerful storm that’s moved from the Maritimes into Newfoundland and Labrador is packing wind gusts that have reduced visibility to just a few hundred metres on some roads. THE CANADIAN PRESS/ Paul Daly

Environment Canada had issued multiple snow, storm surge and wind warnings Thursday, saying many areas of Nova Scotia could see wind gusts of up to 100 kilometres per hour and snowfall amounts of 40 cm.

By early Friday, however, several storm warnings had been lifted, including those covering the Halifax area and the southern half of the province. It’s estimated that upwards of 30 cm fell across the province overnight, with about 20 cm falling in the capital.

P.E.I. saw about 15 cm of snow and was under a winter storm warning, while parts of eastern and southern New Brunswick got hit with about 20 cm of snow.

The system was on a track to move across Cape Breton, where warnings said winds could gust to 100 km/h before diminishing later in the day.

But even with the snow easing off in many areas, road travel was expected to remain hazardous due to reduced visibility caused by blowing snow. Police in several jurisdictions had warned people to stay off roads.

“Officers have reported on patrols this morning that road conditions are snow-covered and blowing snow had decreased visibility,” Const. Ken Macdonald of the New Glasgow police said in a statement about roads in northern Nova Scotia.

Flights to and from Halifax were being affected by the storm. The Halifax Stanfield International Airport website listed numerous flight cancellations and delays Friday morning. Passengers were advised to check with their airline before venturing to the airport.

Many schools and universities in the storm’s path were closed or delaying their openings Friday, while municipal offices did not open until 10 a.m.

The weather has also delayed some Marine Atlantic ferry routes in the Cabot Strait and forced the Confederation Bridge to issue a restriction on large vehicles, including tractor trailers and buses.

Travel on the Englishtown and LaHavre ferries in Nova Scotia was shut down due to the weather.

Most of Newfoundland, including the St. John’s area and the Avalon Peninsula, was under freezing rain and wind warnings. Environment Canada said the freezing rain would change to rain, with winds gusting of 80 to 100 km/h. A blizzard warning was in effect over much of southeastern Labrador, which could see 20 to 30 cm of snow. Storm surges were expected in the Port aux Basques area.

The storm had roared up the northeastern United States, where it dumped up to 30 cm of snow from Philadelphia to Boston.