Approximately two-thirds of recalled inflators involved in the Takata recall in the United States have not yet been repaired, U.S. Sen. Bill Nelson (D-FL) reported late last week. 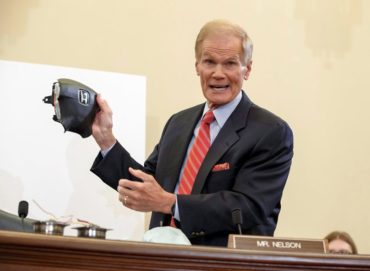 FILE – In this Thursday, Nov. 20, 2014, file photo, Senate Commerce Committee member Sen. Bill Nelson, D-Fla., displays the parts and function of a defective airbag made by Takata of Japan that has been linked to multiple deaths and injuries in cars driven in the United States, during the committee’s hearing on Capitol Hill in Washington. Despite thousands of mailed notices and warnings of grave danger, since June 2016, Honda is still struggling to fix 300,000 cars with super-dangerous Takata air bag inflators inside their steering wheels. Nelson says Honda should do more. “No responsible automaker should be so slow in repairing defective vehicles where there’s up to a 50 percent chance a driver could be killed or seriously injured if an air bag deploys,” he said in a statement. (AP Photo/J. Scott Applewhite, File)

“The numbers provided to Nelson by the independent monitor appointed to oversee Takata’s handling of the recall show that approximately 30.4 million of the 46.2 million recalled inflators nationwide have not yet been repaired as of mid-May,” the senator said in a press release. In Florida, two-thirds of the roughly 2.3 million vehicles in the state with potentially deadly Takata airbags have also not yet been repaired, he said.

“It’s been two years since the first nationwide recall and we still can’t get these potentially deadly vehicles repaired fast enough,” said Nelson, the ranking member on the U.S. Senate Committee on Commerce, Science & Transportation. “We’ve got to pick up the pace on boosting production of replacement inflators and assisting consumers who need to get their vehicles fixed.”

In February of this year, Japanese auto parts maker Takata Corp. pleaded guilty to fraud and agreed to pay US$1 billion in penalties for concealing an air bag defect blamed for at least 16 deaths, most of them in the U.S., the Associated Press reported on Feb. 27. In pleading guilty, Takata admitted hiding evidence that millions of its air bag inflators can explode with too much force, hurling lethal shrapnel into drivers and passengers.

Nelson said in the release that to date, defective Takata airbags have been not only linked to as many as 16 deaths, there have also been more than 180 injuries worldwide.

In Florida, where heat and high humidity are thought to be contributing factors in the airbag failures, the new figures show automakers have repaired only 1 million of the roughly 3.1 million defective inflators believed to be in the state, which means there are still approximately 1.5 million vehicles in Florida with one or more unrepaired – and potentially deadly – airbag, Nelson said in the release.

The new figures from Nelson came just two weeks after four of the nation’s top automakers – Toyota, BMW, Subaru and Mazda – agreed to provide US$533 million to owners of vehicles equipped with the faulty airbags. “A portion of that money will reportedly be used to encourage owners to bring their recalled vehicles in for repair,” the release said.